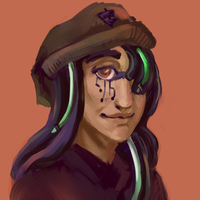 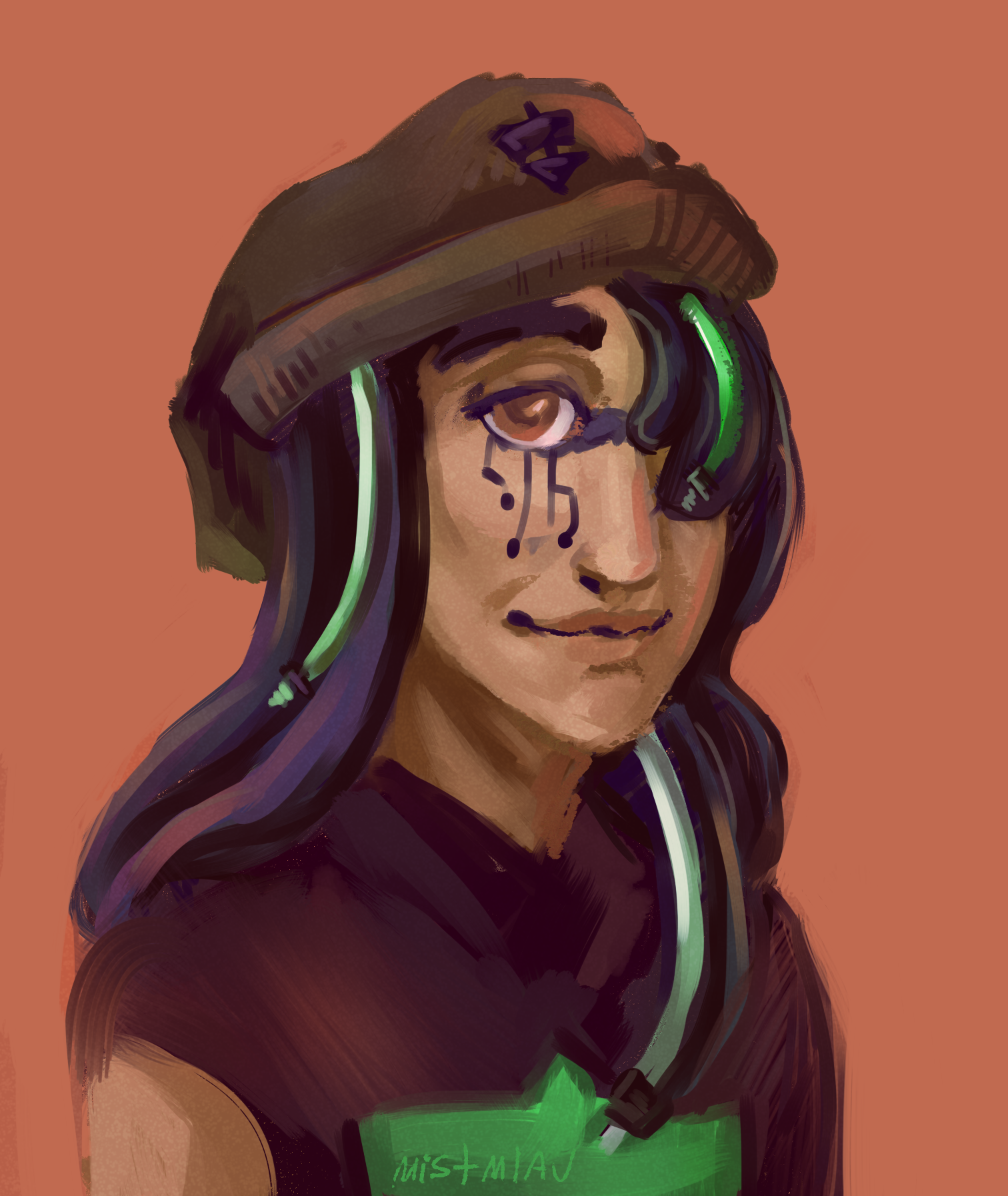 The anxiety-ridden and wannabe professional DJ.

A healthy looking teen, Nick is a mexican boy with quite a few scars. Missing his left arm and right eye, his skin is covered in callouses and healed cuts. He covers the left side of his face with his perfectly cut, thick black hair, to hide burn scars that riddle that side of his complexion. His left arm is an uneven cut stump, with a thick scar in the center. Nick does not make any attempts to hide this. He also has scars from self harming on his right wrist, which are hidden by his armband. He ensures that these scars are covered constantly, no matter what he is wearing. Nick has several computer chords clipped into his hair, notably two male chords on the left and right side of the front of his hair, and a USB chord on the right underside of his hair. These are not functional in terms of general usage, rather are intended for Nicks poorly-made DJ setup. The markings connecting his eyes, and the markings under his eyes, are permanent, however, and serve as an identification method for Dr. April. These markings allow him to avoid government standard facial recognition technology, while still being able to use facial recognition on his own technology.

Nick is extremely quiet and often kept to himself, making him hard to get to know. He sets aside his emotions for what he is told to do, making all interactions with him almost completely ingenuine. The times where he is genuine, he tries to surpress his emotions at all costs, and comes off as annoyed and judemental. While having a mental episode, Nick's personality becomes extremely clingy and obsessive, relaying months old information out loud for up to hours on end, as if trying to hold onto the information and process it. That being said, he is not violent during these episodes; rather, he is just trying to hold on to somebody, or something of importance. After recieving much needed therapy, Nicks personality becomes more lax, and although still kept to himself, is able to express emotions when needed and has no problem showing affection towards those he loves.

Because his father, Arche, was absent from his life for many years, Nick was left with his Mother to be raised. His mother was a top scientist, who worked alongside Dr. Faustus and Dr. April. However, April began working on numerous unethical experiments, and murdered Sofia in order to continue with her work. One of these experiments would later destroy a majority of the secluded labratory, and cause the death of Faustus's wife at the time. This accident also left the right side of Nick's face severely burned, as he was held by his mother as she died during the incident. After this, Nick was legally adopted by Dr. April, who began to train nick as a soldier in secret, using him to later try and take control of the government. During this time, they also moved to a labratory in a more urban area, which would invite Nick's father, Arche Weenus Borkowski, back into his life. However, as Nick grew older, he became closed off and spiteful, viewing his only purpose in the world to be serving April. Nick lived with Dr. April until recently, acting as her guard dog and main servant. He was trained to assassinate political rivals of April, and,that's what he's did for many years, even as a young child. But, as Nick learned more about his broken childhood, and was further abused by April, he disobeyed his adoptive mother, and then escaped into an alternate dimension.There, he leaked evidence against the state and against April, and founded an anti-government group known as NOCAM. A civil conflict began as NOCAM grew large in terms of members, prompting a small civil war. During the early stages of the war, Faustus and Matilda join with Nick, and by the late stages of the war, NOCAM had milita with nearly one million soldiers, and Arche had been rescued and brought to a NOCAM base as well. NOCAM suceeded in dismantling the core state, winning the war, and Nick returned to his home dimension. With permission from a judge, Nick is on temporary house arrest until further details involving his case are revealed. Nick, after returning to his home dimension, learns of the death of Dr. April, and becomes more at ease. He develops a strong crush on a family friend, and the two continue to be close friends for a long time, even considering a romantic relationship. Nick and his family, including Faustus, Arche, and Matilda, work together on forming stronger bonds with each other to all understand each others perspective of their situation. Nick and Matilda don't get along particularly well for a long time, but do eventually warm up to the idea of being siblings. Nick was often molested by Dr. April when he was younger, leading him to believe that he was in a romantic relationship with the woman. When he was 13, he was raped for the first time, leaving him confused and deeply disturbed. Similar events would occur until April's death. As a way to cope with this abuse, Nick would continue to believe he was in a romantic relationship with April until he got some VERY much needed therapy and mental help.

I could never, ever, apologize enough for leaving you the way that I did.
― Arche Borkowski

Arche and Nick have an odd relationship, with Nick being slightly co-dependent on his father. Arche, feeling guilty of leaving Nick as a child, allows this behavior to continue. Other than this co-dependency, however, their relationship is fairly positive, with the majority of their interactions being Arche doing his best to learn more about his son, and trying to make up for his past mistakes by getting to know Nick as best he can. Nick does not understand this sense of guilt that his father has, and assumes that this is a normal interaction between father and son. While not hurtful in itself, Arche has a habit of letting Nick's behaviors go unchecked due to his own internal guilt.

Nick and Matilda have an unhealthy amount of sibling rivalry, to the point where they may attempt to seriously injure one another. While Nick dislikes Matilda for her attitude and percieved stupidity, Matilda equally dislikes Nick because he murdered countless people and evaded her for over a year. Although Matilda is much more aggressive with her disdain towards Nick than vice versa, neither sibling is safe from any easily-promted screaming match. Over time, however, the two become closer as siblings, ceasing their hatred of each other.