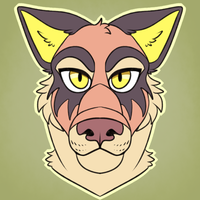 Gabriel is a loner dog-like creature. He doesn't really know where Maw comes from but has a haunch that he is a different species and possibly the last of his kind. He stays by himself in the woods, trying not to freak out hikers. Gabriel has a short temper and is annoyed easily, and doesn't like to socialize or engage in small talk. Gabriel is very annoyed with Maw as a companion, because Maw doesn't shut up. He spends most of his time getting food for the creature that is attached to his tail, which is somehow always hungry even when they share a stomach. He has a few friends in the woodland creatures but that's about it. Gabriel's voice is deeper than Maw's but they're both masculine-sounding.

Gabe is a average-sized dog with pointed ears, long legs, and a long tail where Maw sprouts from. His body is coral colored with darker pink stripes on his back and legs, and a light cream color on his back, stomach, neck, muzzle, paws, and ears. He has a very short dark grey scruff that creates more stripes on his back and Maw's face. Maw has no eyes, but it does have a nose, green gums, jagged teeth, and a long, yellow tongue with a silver tongue piercing. Gabe's eyes are bright yellow with a cream eyelid.