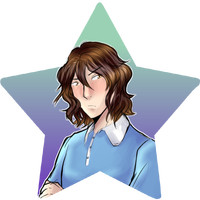 . He’s the definition of a stereotypical anime tsundere xD he hates getting teased, especially by his older bro. He can get mad at that, and would most likely start smacking him lol. He also knows how to curse; he has a sailor mouth especially when mad, but keeps himself in check whenever he’s around Helix. He says he cares a lot more about Helix than Bentley, but deep down he cares about Bentley more than he knows. Felix works in a hospital; I dunno how to explain his profession well, but it’s something like this: he has a desk job but he does files and organizes things for someone else, but he specialises in neurology. He works under his friend, who is a brain surgeon. So I guess he would be like an assistant to him but for keeping the surgeon in check. (Is there even jobs like this btw? This concept of his has changed from it’s initial idea tbh). Anyway, compared to his brothers, he’s the more composed person. He’s also more cautious. He also is a huge worrywart.

Felix lives in a suburban home with his older brother Bentley. He wants to move out one day and live his own life but at the same time he would find himself worrying over whether Bentley would be okay by himself; his older brother tends to get sick easily and Felix is the one with the medical knowledge. Due to this and his older brother's affectionate and somewhat clingy nature, Felix can't seem to find himself a significant other x'D Well this and also he does work a lot as well; not as much to call him a workaholic though.

For some reason idk, he doesn't know how to drive yet. He relies on his Bentley or his surgeon friend to drive him around.

Sometimes Felix would feel a little left out compared to his brothers due to activities the three would do; Bentley and Helix are more outgoing and daring than Felix, so he's often found himself watching from the side or feeling reluctant to do something. For example, Felix doesn't like many amusement park rides so he'd find a way to sit out on it and just watch the other two go play. Or when they go to the beach, he's usually the one sitting on the sand or beach towel shaded by the beach umbrella taking a nap or reading something while the other two play in the water. But there's times where he would join in with them, mainly because Helix reallllllly wants all three to be together. Felix can't seem to resist his adorable twin so he complies to not sadden him.