... Life is a question and how we live it is our answer.

Sachi is not a very chatty person, she prefers the quiet companions over the talkative ones. She loves going on adventures to explore new areas or find valuables to collect or sell. You can find her napping in or under trees when she’s exhausted, this is her way of recharging herself.

At the beginning of her adventures she has always been on the edge due to past experience of exploring the woods and get snuck up on and attacked, whether by thieves or local wildlife. Her weapon is always within reach, and if it isn’t, she will get anxious and keep looking around for potential danger. When she quested with Estinien this feeling slowly mellowed out because she felt protected by him and finally felt at ease. However the incident in Garlemald has left her mentally scarred and is afraid it will happen again, thus living on the edge once again, she is currently still trying to heal from that and is slowly making progress.

Despite dressing fancy for formal events, she doesn’t like attending them due to high class mannerisms that are expected. She never grew up with them and felt like if she did or said anything wrong she would upset everyone. Remaining silent is her choice of action to avoid these awkward situations.

Sachi tends to try and hide her emotions in front of others, but her tail and ears betray her of her true emotions. She may look very innocent and cute but she can get absolutely feisty due to her short temper. She will get easily jealous over the smallest things, and is easily flustered. Her feisty personality she uses to protect and defend those she cares about, she will fiercely guard them even if it means getting herself harmed. Getting hurt isn’t anything new to her, she secretly takes a lot of pain medication and healing potions to continue her journey, sitting down to rest and heal is off the table for her and will argue with the healers a lot to let her go. When the effects wears off she tends to retreat herself because she doesn’t like others knowing she’s hurt.

Regardless of her rough side, she is very loyal and friendly to her friends and loved ones. She will occasionally tease them for fun but would never mean harm to them. She loves gifting them random items that remind her of them. She may not be book smart due to preferring action over reading, but has a very creative mind that helps her figure out things easily, even if she has her own ways about it that others would do differently.

She enjoys a few good rounds of sparring to test her abilities to full strength, this combined with her stubbornness tends to drive her to the limit and exhaust herself unless she has quick wins. Her reputation matters a lot to her so she tries to not come across as easily defeated. 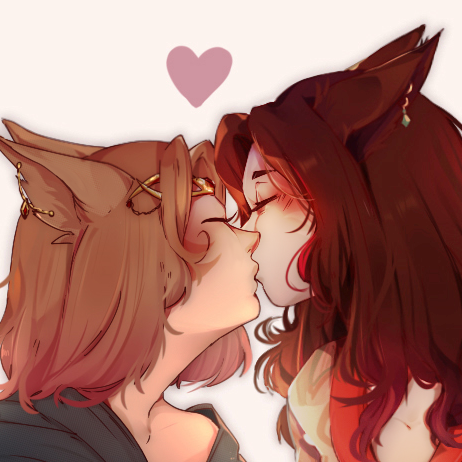 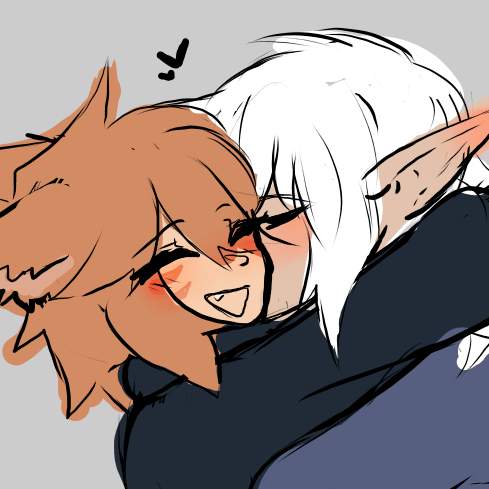 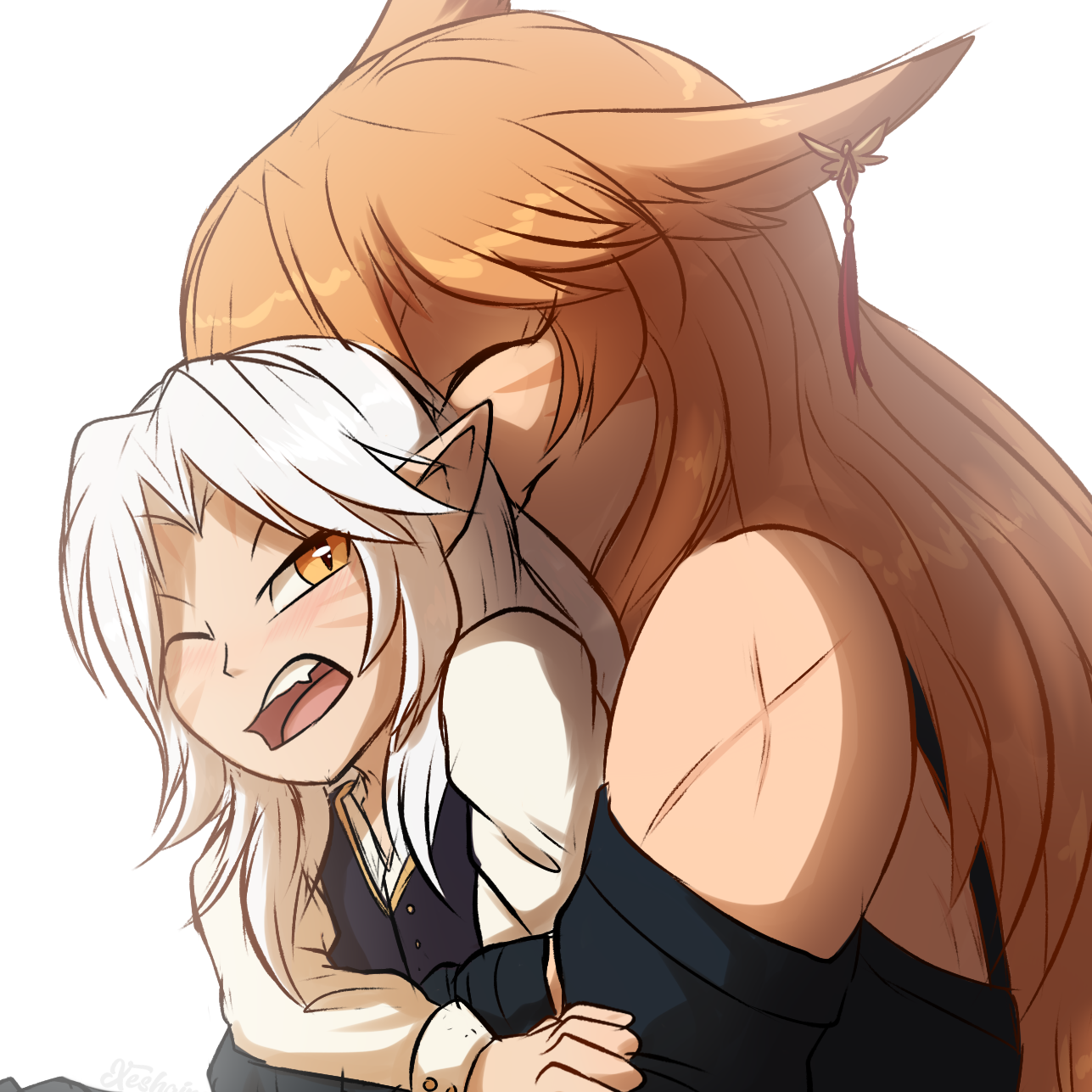 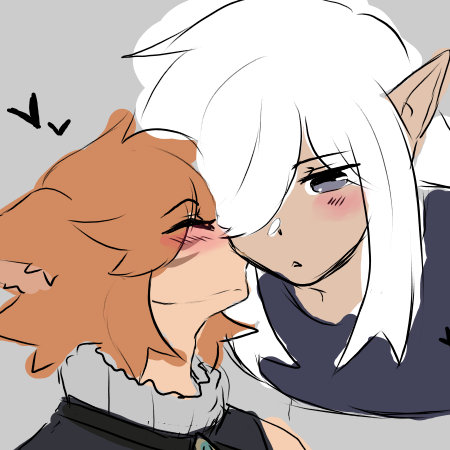 Sachi’s name is not of Miqo’te origin, it was given by her adoptive Elezen parents residing at a farm. Her full name is Sachiverelle, but was always nicknamed Sachi, so she adapted that name permanently. She does not remember what happened to her original parents because she was too young to remember.

Her young life all happened around the farm, helping out where she can by taking the harvested crops a few towns over to sell, but it didn't make much money. One day in a different town she noticed a board with several requests that offered a good amount of gil for fulfilling the requests. She took up a simple task she could handle which started with a personal delivery to the requester's friend a couple towns over. She took the reward and gave it to her parents to relief some stress to come by financially, she saw how much it surprised them and how it made them happy. This in turn made her take on more of these quests, and as years went by she kept taking on more difficult ones. Even at a young age she always had the desire to go exploring around the area, these quests helped satisfy that need and was rewarded as well. As time went on the family was living happily together, with far less stress on their mind thanks to the extra work Sachi was doing. She didn't mind it either because her craving to go adventure was filled with these small jobs.

Sachi may be the Warrior of Light, but she isn’t a magical super hero that has no weakness or fears. She is afraid of pitch black darkness, so she sleeps with a dragon plush and lantern on at night. She doesn’t like others knowing about this since it makes her feel insecure and weak. Deep waters like oceans also terrify her and will set her in a panic if she can’t see what‘s under her. She also gets easily spooked and afraid of large skinny creatures such as the Yarzon, but even smaller bugs will creep her out. Thunderstorms at night will frighten her a lot to a point she will hide with her blanket and plush in the corner or seek any other tiny spaces to hide in or under. She doesn't know why they spook her but she assumed it's the loud noises and sudden bright lights.

Her long tail helps her with quick movements and turns, she is very agile and prefers light weapons for that reason. She is not that skilled in physical strength so she relies on her swiftness to dodge and strike at the best moment. Sometimes she gets too reckless and tends to get hurt because she feels to over confident with her moves.

Her right leg has a small limp to it from a stab wound never healing properly, she tries to balance it out as much as she can to not make it obvious but veteran healers tend to pester her about it since they notice it. It doesn’t hurt her anymore nor give any discomfort, she just can’t help the small limp.

Ever since a little kid Sachi was fascinated by dragons, she loves how they vary in shapes and sizes. She always felt connected with them for some reason. Going on adventures to explore new areas, especially ones with nice sceneries are her favorite things to do. On these adventures she'll take opportunities to nap wherever it feels convenient to recharge her energy. Later in the evenings she'll visit taverns if they're nearby and get herself sweet rum when available. She does keep some on her in a bottle but saves it for the occasion when wanting to mellow out a little. For food she will grab anything involving bread or cheese which are her favorite, and avoids spicy food at all cost. On her journey she tends to get stopped by travelers and local folks to ask about things, to which she prefers keeping it short as she really dislikes lengthy conversations.

Thunderstorms and other loud noises spook her, so when it gets a little too loud you'll see her retreat somewhere more quiet where she can feel at ease. For that reason she likes visiting places late in the evening when most people left for their homes. She enjoys practicing dancing by herself, mostly learned through by watching other folks and trying for herself somewhere private. She doesn't feel too confident in her skills just yet so she keeps it private where she can. Cooking various meals from scratch is also one of her favorite things to do, especially when it involves cooking for others. Trying new recipes is a way for her to explore new things and has a lot of fun with it.

A journal is something she keeps on her together with her herbarium. She writes important duty notes in the journal and after completion she likes doodling some thing that happened on the adventure. Her herbarium is full of various plants and flowers she collects and then classifies into groups of healing, poison, cooking, and unknown. Next to the collected specimen you’ll see drawings she did to imitate them as this helps her remember them better.

Loose clothing that fully drape over her arms and legs are her go-to to hide her scars. She is rather insecure about them since she thinks it makes her looks reckless and an easy target. Only once she was together with Estinien she started wearing shorter clothing when he was around, since he praised her scars as a mark of victory in battle, and it changed her view on them. However for events and gatherings she still prefers covering them up to not scare new people. For duties she will wear armor and other protection accordingly, but most of the time prefers lighter equipment so her agile movements aren’t slowed down by heavy armor. Sometimes she will opt for clawed gauntlets she dips in poison just in case she loses her weapon or something comes in close quarter she can’t defend herself against. For formal events she will wear somewhat fancy stuff to not stick out in the crowd and blend in more, after all she does care about her reputation.

Her most important possession is a crescent moon necklace with a star charm hanging from the tip. She will always wear this on various necklaces and chokers. It is symbolic to her as it was for her cat that meant the world to her, the moon being her and the little star being the cat. Anyone trying to steal this from her is faced with harsh consequences she doesn‘t like to admit.

Currently residing in Old Sharlayan. Her current relationship is.. semi-poly? She is married to Shu, her wife. But she and Sachi both have their own husbands at the same time, but no relationship with eachother’s husband. Shu is with Raha and they have a daughter named Lyna. Sachi has a son with Estinien named Lucian, and a daughter named Nora. The whole family lives together as a clan according to Keepers of the Moon traditions, but with some exceptions due to the complex relationship dynamic.

Sachi's voidsent is different from the others that have been seen, hers looks more draconic and is more scaled. Between the scales on the neck it emits a glowing light that can be rather ominous in the dark. It is still unknown where the the voidsents truly come from, but a rumor has it they're a reflection of the thirteenth. Sachi avoids summoning it in public, since it's not something you see everyday, and it can frighten a lot of people. She cares for her reputation so she only summons it when truly needed. She named it Armageddon, or nicknamed Geddi to make it seem less spooky. It first came forth when she was at the brink of death, this happened a few times when she was in a pinch, and she now believes it’s some sort of guardian protecting her. Whenever it senses she’s in danger it will summon itself, which can lead to some unfortunately incidents with local folks. This includes Sachi having nightmares as well, it will sense the danger so it will loom close to her to protect, unfortunately as wholesome as it sounds, it wasn’t for her loved ones when they woke up in the middle of night to see Geddi around.