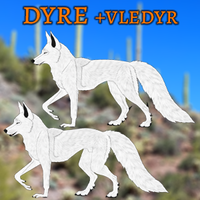 The dyre is a coyote-sized, socially monogamous, and territorial primeval. They're primarily known for their ability to use tools, their primate features, their quick adaptation, and their resilience.

The dyre is like human: Spread out globally. There's no longer any population of them that's completely isolated enough for genetic distinctions to form. The species is separated into two groups for the sake of simplicity.
• Red dyre - Commonly known as kyno diris rufus, they represent the 55% of the population that have no vledax traits. In layperson terms, they're "purebred."
• Arid vledyr - Also known as kyno diris aridus, it's an unofficial term to denote the hybrids of vledaxes and dyres, whether direct or ancestral. They consist of 45% of the dyre population, hence it's debated as to whether they're their own subspecies or not.