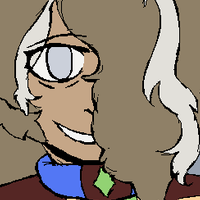 Originating from a small village located on a cliff face upon a mountain range, Gilligan was trained from a young age to become a guard protecting both its peoples and livestock from mythical beasts and other creatures roaming about its harsh landscape. An occupation long since passed over generations through their family. Gilligan, took this responsibility with pride, over the many years becoming no stranger to treacherous terrains, weathers, long working hours, and fierce combat.

Gilligan is a bit dim, not being one to handle complex bunches of information with ease. Not dumb persay, just not the most aware or tact when it comes to analyzing information. They have much to learn in the grand scheme of things... somehow managing to scrape by in their exam seemingly through pure determination and sheer luck alone. Despite this simple nature they have a great wealth of knowledge when it comes to the wilds as well as holding an adept inner compass, memorizing layouts of land upon even the first visit. Gilligan finds themself most often working off of inexplicable instinctual feelings, almost as though it is a deeper connection to the world and life itself! This intuitive understanding they can hardly explain and wish to learn more about. This in being the strongest driving force to becoming a Hunter- setting forth the goal in order to find the 'string' which ties together every being on earth, planet in the cosmos, and heavens above.

They're softspoken if not a bit shy but will quickly open up to others when they feel comfortable! Upon unlocking this inner layer of themself Gilligan is shown to be a humorous and rather daring individual!

As a part of training to become a village guardian Gilligan, along with their ancestors were tested to reside in the wilds for 14 days only bringing along the clothes upon their back. From there on out they must survive this a right of passage, returning home only once the allotted amount of time is up.

During this time amongst the bleak landscape they came across a formation of stones they'd never seen before... that... no one had seen before? Undisturbed for a countless number of years. Tattered pieces of cloth tied to thin ropes adorned the formation and in the middle of it all lay a small talisman! It was marked with a symbol not used amongst their people. Being the curious person they are Gilligan picked it up stowing it away to bring back home as both a memento and perhaps to discover where it had come from.

Initially, nothing of significance happens after coming into contact with this strange item. Though, upon their return home Gilligan soon grows horribly ill. No one believed it to be strange as Gilligan had just returned from facing the frigid elements. Eventually they recovered, none the wiser that in actuality this was the process of the soul merging with their own!

Unlike the vast majority of nen users who take much time deliberating what they want their hatsu to be Gilligan's seemed to be almost completely beyond her parameters. Their aura, infused with the energy of the spirit residing within them consequently resulted in an inherently destructive hatsu. Gilligan wished to develop an ability in order to protect others and his kin, though try as he might it could never come out the way in which they desired. With more training they could surely adapt to using this detrimental ability to their advantage, though for now they're reluctant to make much use of it for fear of harming others.
Beyond Hatsu Gilligan has a rudimentary understanding of the other elements/techniques to nen but have yet to master any certain aspects.

In terms of pure physical output they're incredibly agile, endurant, and resourceful! While she is certainly not the hardest hitter on the field her primary objective back in the village was to corral threats away from home- Killing things outright was and still is an option that is kept as a last resort.

- Has a spirit residing within their body, giving them their supernatural levels of intuition (Unbeknownst thus far)

- Their peoples adorn ensembles of brightly coloured garments, stark in contrast to the many shades of grey and brown in their environment.
Most often these adornments bare resemblance to precious metals, gemstones, the earth, sun, or stars/moon.

Gilligan's aura takes on a tar-like viscosity and becomes acidic nature. The potency of this ability is determined by working in tandem with the ability “As One”, as a benchmark it is almost always able to destroy/burn small portions of organic materials such as plant life and flesh, though be it incredibly slowly when at its weakest.


Conditions and Limitations: The potency of this ability cannot exceed that of acids that combust upon making contact with water.

(Typically while using ryu) Gilligan's aura takes on an acidic and absorptive state, draining the nen of those it makes contact with. Whilst doing so this charges the power of his “Corrosive Touch” or could even be used to replenish his own aura.
Alternatively, they may also use the lifeforce of other beings by dissolving them to achieve the same effect.

This energy once expelled needs to be replenished via the same cycle.