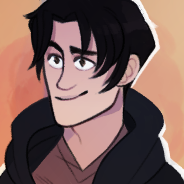 Outside of the proper era universe and into the future of the FC universe, Travis is just a guy who happens to be a distant relative of Node's creator. Node's sensors pick up on the relation as soon as he crosses paths with him.

Practically everything about him is the same, except now he has future gadgets to try out and more aliens to get into trouble with...
i imagine his real dad is forever a mystery, even to his mom this time, but Node's creator is related on the paternal side so that way Travis would've never known unless Node explained it all