A mischievous Fox-Ringox with a knack for picking up unfortunate followers and causing trouble.

Enmu is a mystery to all parties involved (sometimes himself included) and his intentions often change with the tides. When he wants something, he'll often work hard to get it or trick someone into getting it for him. He loves to play pranks and solve mysteries. His demeanor often remains calm even when a situation becomes tense, the only indicator of his mood being how his tail swishes about.

Humans (most of the time)

The smell of burning flesh 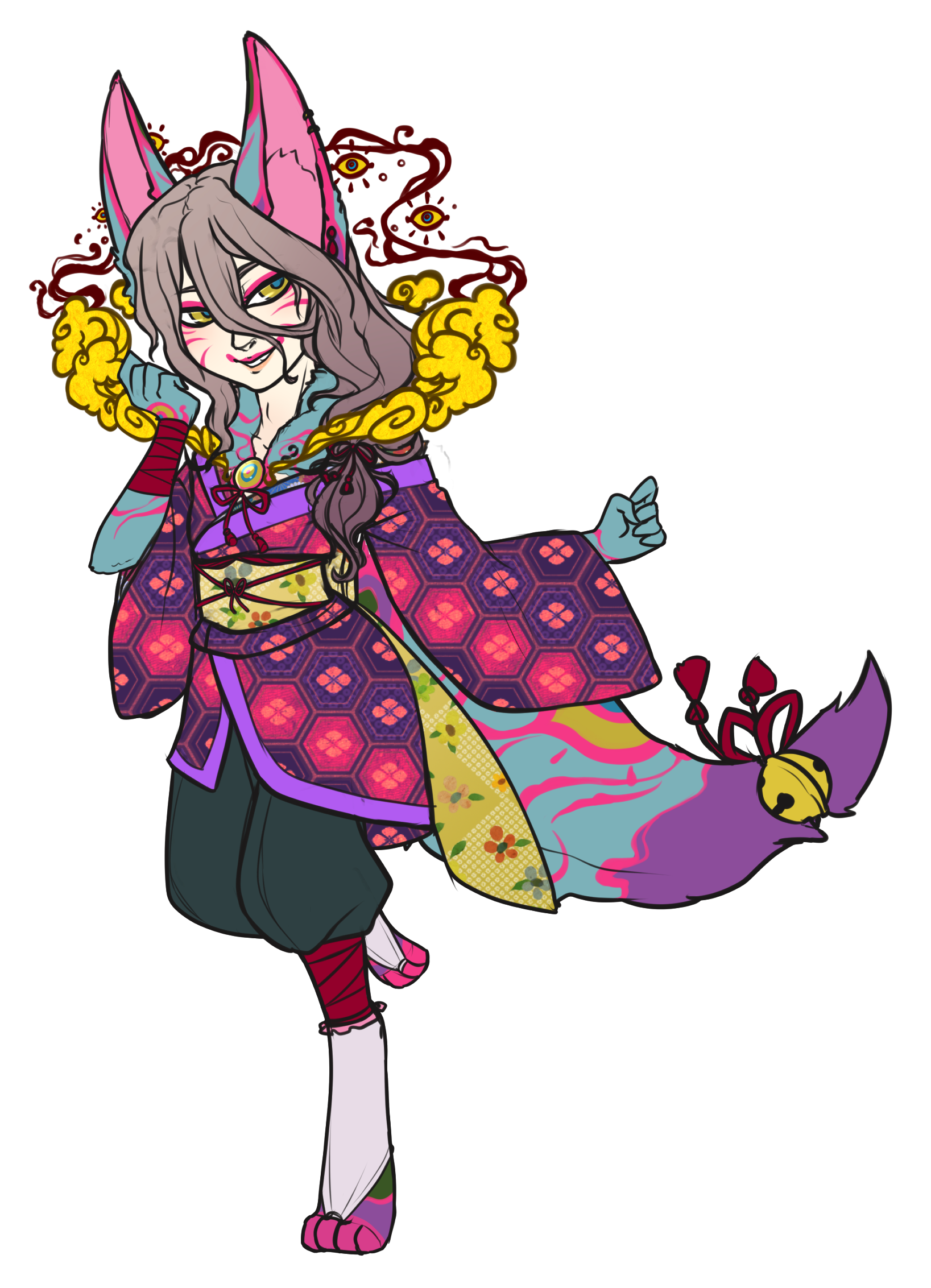 Enmu Shisen was born from wishes for mysteries to be solved; a particular incident of an unsolved murder in some distant past resulted in his birth. Since then, he has made a name for himself as a helpful deity, often being mistaken as a Kitsune due to his nature and demeanor as well.

He's usually found around recent crime scenes where there is particular difficulty in its solution. Almost every case he's solved is due to supernatural cases, as he has varying success solving mysteries in which humans are the culprit. He doesn't like being wrong; He feels his purpose is to help people, so he feels no purchase in helping solve cases involving entirely human faults (that is, anything that isn't influenced by another inhuman being like a spirit/demon/supernatural creature).

Avatar of a God

Though he speaks nothing of it, Enmu's beginnings are not something he fondly remembers. Born under unknown circumstances, he found himself tossed into the laps of a human couple- or at least, their doorstep. They felt as if he had been some sort of sign from their gods, so they raised him with care. He grew up in a small, mundane human village filled with superstition.

Some time in his youth, he grew jaded with the proper upbringing he lived in- his parents had been wealthy people, as the village had revered them as some sort of divine family after being gifted a "kitsune child." In addition to this, the people of the village treated him as if he would curse them, sometimes they would even pray to him if something bad were to happen to their crops or livestock. Due to their treatment of him, Enmu would spend a majority of his time studying and reading instead of playing with (or getting picked on by) the other children.

His interests piqued at the mentions of magic and trickery which Kitsune were known to do. In secret, he would practice his craft as his powers began to develop. Sometimes, he would play tricks on villagers that were particularly difficult to him. Sometimes, he would find a way to bless a field of crops. It didn't help the village's view of him, but he saw no harm to it.

It was in his teens that he would have a harrowing realization he was being used by his parents. They didn't seem to take any interest in what he wanted to become - a powerful mage, as he'd read in many story books- and instead continued to force him to be the village's deity because the spoils of their tribute kept them wealthy. The last straw would be when they lent him to a merchant for a night.

Up until this point, Enmu had simply let it happen. He had been considered a deity, and deities kept themselves out of human affairs. It was the audacity to give him away like property that filled him with disdain, and all the magic he had been practicing up to then was soon directed right at his parents. And the entire village.

With the deed done and the village burned to the ground, Enmu fled in fear of being found- by survivors, by gods, by who-knows-what- but the feeling of power had left a taste in his mouth that he knew he had to either quench or destroy.

He wandered the world for years, learning what he could about himself and the power he held. He spent time in shrines and learned from the humans there about blessings - naturally, disguised as a human or through windows. Maybe he was cursed, he wondered. Eventually, he knew, he would have to face his mistake.

When he returned to the village, it was filled with monsters created from the ashes of his mistake.

He slayed the monsters with what little knowledge he had, but the battle left him feeling much less fulfilled than he had hoped. He felt even more lost than before, and worked his way to the old shrine. He lay by a fire, wounded and tired, seaching for answers in the embers.

He could hear a voice from the fire, from the sky. Unable to move, his ears twitched to find the source of the voice.

"If you want purpose, little fox, I will give you one."

It sounded like a whisper, but at the same time Enmu felt a warmth over him. It was a feeling of floating in warm water.

"Alright, but at least give me a good one." He muttered under his breath.

It felt as if he was having a conversation, wordlessly. He and the voice were conveying feelings, thoughts, images. He could smell incense and water, flowers and embers. When he finally awoke, it was barely daylight.

Dawn approached, and he was not where he had fallen asleep. He could hear a distant laugh, and a 'good luck.'

From that day forward, he found himself in new worlds- eventually meeting the entity which now controlled his life, called Nebula. He wasn't sure about why he accepted this fate, but it was more interesting than laying in a shrine looking for answers in the wood.

Life as a Teacher

Sometime in his life, he happened across a young Auracorn by the name of Cinders whom he influenced to learn magic. He taught the young man his skills in shapeshifting and found he was partial to pyromancy. Taking the man under his wing further, he made the boy his student and taught him everything he knew about magic. He spent several years with Cin, holding nothing back in his lessons and breaking from his travels to spend more time with his student.

Due to Cinders' request, the two had began to delve into particularly dangerous magic. The two had made plans to force themselves into a library filled with forbidden magic scrolls when En became uncomfortable with the subject matter. Cinders' willingness to learn spells that could rend other beings' souls into useless ectoplasmic gunk forced En to make the decision of keeping his student sane and steering him away from the path he'd chosen or leaving him to fend for himself. When reason would not coerce Cin to stop, Enmu got fed up and simply left his student without another word.

Not his proudest moment, he will admit, and it's one of his deepest regrets. He wishes to someday reunited with Cinders and reteach him more powerful and benevolent magic.

Nowadays he simply lives a life more like his original, preferring not to take any sort of charge until he deals with Cinders and rather solving mysteries the way he used to.

On his travels, Enmu would find himself picking up a new student. A creature by the name of Amet fell into his care (or rather, "poofed") when the poor thing nearly met an unfortunate end with Cinders.

The encounter was accidental, but Enmu felt it was necessary to take them in. Otherwise they would simply continue to follow him.

He's not sure if he likes the enthusiasm, but it's a change of pace.

Some time after that, Enmu happened across Ember, Cinders' creation. Shocked that the being was able to live on his own for so long, he quickly took him in to do more research on the manner. Ultimately, Enmu decided it would be best to keep the Auracorn in tow- he didn't want the boy to end up in the wrong hands at all.

Seeing how Ember and Amet hit it off like brothers, he's relieved someone can keep an eye on Amet better than he can. But the two of them also like to get into situations together...

With two students under his wing, Enmu wasn't sure how much more he would be able to take in. As usual, Nebula appeared with another important quest- care for another Ringox of utmost importance.

Without being able to say 'no' and unsure what to expect, Enmu was given a core. When infused with magic, the Ringox sprung from the core and right onto his face. Dazed, confused, and on the ground, it was obvious to Enmu exactly who Jaaku was- a child of The Exiled One.

And he was blind.

It took a few days before Jaaku began to form sentences and words, going specifically off what Enmu, Amet, and Cinders were teaching him. His innocence is what sold Enmu- he probably had no idea what he was, who his parents were, and he had a purpose unknown to him.

It didn't take long for Jaaku to grow on him.

But he could do without the sass. Sometimes.

His most dedicated and promising student, Amet has become a life-changer for Enmu. He may not admit it outright, but he truly enjoys their company and willingness to learn and try. He gave them a name, now he's responsible for them.

His former "most promising student," Cinders is now the bane of Enmu's existance. He worries the man will seek him out to kill him or his new student one of these days and he'll have to kill him. En officially has no will to be around Cin, nor feels any promise in his abilities.

Another responsibility, this time its someone Enmu willingly took on. He feels Ember is another page in the book of his redemption- a remnant of the relattionship he feld from. He sees promise in Ember just as he'd seen in Cinders.

Though Jaaku was sort of dropped into his lap by Nebula, he rather enjoys this boy's company. They're actually a bit alike in terms of personality, he feels. He knows some of his feelings for Jak also sprout from Nebula, but his sort of strange fatherly protector sense is awfully genuine. That and Jak listens to him talk and doesn't expect all the answers to come from him.