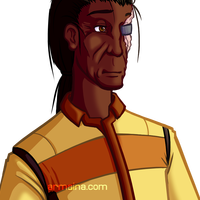 Murder and Former Gang member, Grace Armes is the Captain and owner of the Spaceship Lolipop, and co-owner of Paul's Botanical Boutique.

6ft2in tall, lanky yet toned build, dark skin and long black hair that is often drawn  back in a loose bun of sorts. Heavily scarred, most notably burn scars  all over the left side of her face from a blast back on a sabotaged  explosive. Very often seen wearing a very weathered cowboy hat, but she  has been known to wear other hats. Dresses in button up shirts and long  sleeves, high collared and well tailored along with a tailored pair of  slacks. When necessary she dons a set of weathered but effective heavy  armor.

Very guarded, outwardly aggressive and uncaring, and highly distrusting of others. Blunt and direct in speech, swears a lot. Despite her hostile demeanor, she's indirectly compassionate, helpful to those around her who need it, but never acts as though she takes any enjoyment out of it and often feigns contempt or disinterested about it. Often she tries to hide her charity or compassion, explaining it away with excuses of necessity or obligation.

Her work with explosive or incendiary she holds as her best and most skilled work. Much to the fear of her past associates, she had a preferences for 'feeling' the compounds out rather than metered measurements, taking into account any oddities or impurities of the chemicals at her disposal. Likewise, her accuracy with ranged explosives are more intuition based than any real calculation, using both direct or splash damage to it's best effect.

Though she's most know for her work with explosives, her other skills in combat are not to be underestimated. She holds fairly frightening accuracy with the heavy pistol she carries with her at all times, when prepared she keeps a sawed off shotgun handy for anything that gets too close. When all else fails, her bowie knife can often be enough to take out the rest.

Though not as infamous as her combat skills, her luck in games of chance have been to the benefit of any financial need. Being both very good at reading others, determining the odds, and just plain intuition, she makes a substantial amount on gambling and bet making. Her preferred option for betting is often in a few quick poker games, and reading the contenders in feats of skill.

Her focus on her job and upkeep of the ship seem to leave her little time for recreation, and what she does enjoy she isn't entirely open about. She has several slice of life and low tech living, often stories about farming families and travelers, with a preference for books with a softer tone and light outcomes. Her times spent holed up in her room or simply missing from the ship when docked, are often spent re-reading her favorite books in a quiet place.

Other hobbies include creative writing, something she rarely shares outside some of the very few that know about it. In addition to this, she keeps personal journals rather frequently in old bound, discrete books, preferring act of writing with pen. Hats are also an unusual fondness for her, and keeps a reasonable collection she enjoys wearing, most of them taken from fallen opponents.

Her early life was without much incident, growing up on one of the few remaining farms at the time with her Grandmother and sole caretaker. After the death of her Grandmother, she spent a short time staying with extended relatives, until murdering her own cousin in the defense of another. Rather than be caught and tried for murder, regardless of the outcome, she ran away and managed to disappear from detection, living with other street kids and homeless until joining a gang both in an effort to further hide from an eventual arrest, as well as work toward a new identity.

It was not a choice she made out of desperation, but one of calculated consideration. Knowing both the history of the group, the work she would likely have to do, and the kind of influence it had elsewhere, all contributed to her choice. Even as a new, and young member, her skill and presence made her particularly intimidating, allowing her to achieve higher status and rank very quickly in her time there. Most of her work involved violence, being many of the front runners in contraband stealing and conflicts with rival gangs.

Despite not particularly caring for her position or affiliation with a gang, she did find herself pleased with the results. With her life there she gained a new identity and name, creating a greater gap between her old name and life. That name brought a along a reputation, her activities reaching ears of those far outside the gang she lived in. She needed to be a leader, not a follower.

Leaving her current establishment did not go without incident. She took her opportunity to leave after an unrelated sabotage from an unknown member of her own team. A back blast of her own plastics setup on a blast door injured her left have severely, causing the loss of her left eye and mass burn disfigurement. With the rest of the remaining team either executed or pinned by gunfire, she managed to fight the way a for herself and the few others left alive. Using the cover of vengeance, and the help of the only trusted friend, Paul, she had made during her time there, she disappeared from the radar of her old gang.

Already crippled by the blow from the sabotage, her old affiliations did not have the focus or manpower to go after her. For a few years she laid low, recovering from her injuries and amassing goods and supplies. In time she had gained enough funds for an unregistered starship and a business license for trans-galactic sales and shipment of exotic plants.