Soon to be eighteen, Ryder Scott lives in Syracuse, is a wannabe actor and coder, and is the son of a police officer. A year after the disappearances of his two favorite streamers and his favorite artist, there has been little police progress. No one is any closer to discovering who the culprit might be. Displeased, he decides to get to the bottom of it on his own. With reluctant help from his timid girlfriend, he attempts to figure out who’s behind the elusive indie game that connects the cases. But when he gets his answer, he realizes he might’ve dug too far―and unwittingly dug a grave or two.

Max Aleshire and his lover, rich psychopathic serial killer Cameron Fenn, have been through difficult times. After a traumatic event and a severe head injury, Max’s mental state has started to unravel. Worried about him, Cameron suggests they get away from it all for a while. So, for the holidays, they travel to Switzerland together in an attempt to recover. But Cameron isn’t the only one with an interest in Max: Ash Sinclair, a rich auditor in Zürich on business, also has his eyes on the Aussie. He seems a lot nicer than Cameron, but Max learns too late that appearances can be deceiving.

Max prepares himself to express his love for Stacey, his girlfriend of three years, at a New Year's party. Love is difficult for him as an introvert, but he's finally ready to give her the love she deserves. Unfortunately, things don't always go as planned.

Val Kozel wants people to know him. That's why he started vlogging and doing live speed-runs. Working alongside best friend and fellow streamer, August, he works toward internet fame. It finally looks like his efforts won't be in vain; his speed-running is helping him build a name for himself. He couldn't be happier. For an early Halloween event, he and August take a request to play a seemingly childish indie game, known for the disappearances of its previous players. The only reason they accept is to debunk the rumors once and for all. What they don't realize is that might be easier said than done. Soon enough, Val regrets even having downloaded the game in the first place. In a matter of days, life as he knew it has fallen apart before his eyes. In fact, it might be about to end. Alas, his viewers are oblivious to his horror. Because it's Halloween, they all think it's no more than a dramatized event . . .

Australian artist Max Aleshire doesn't belong in Boston. With only his ex-girlfriend Stacey, he's become an introverted recluse. By chance, he meets a handsome stranger online: a writer named Cameron. After only a few days, he realizes he might be developing feelings for him! Little does Max realize, though, that there's a much darker side to Cameron. 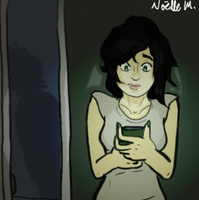 Stacey is 20 years old and lives by herself. Yet, she can't help but feel like the bumps she hears in the night aren't figments of her imagination . . .