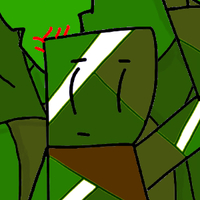 at Halcyon resorts, con artist, member of the band JURE! and the others Andrej takes good care of his appearance. Growing up in rich family he's used to buying good quality expensive clothes, but values simplicity and comfort over fashion and style.

Andrej is generaly heathy, but enjoys good food, playing video games or watching tv and avoids doing anything than might involve too much physical activity. He likes to do what he wants and healthy habits ofen have to take the back seat to his own enjoyment.

Andrej is very freindly and outgoing. He loves being around people, joking around with his friends, pillung pranks and scamming people for money. But because he can never seem to be serious and often seems disrespectful to others because of his constant pranks and scams, a lot of people don't seem to like him too much. But to the ones who can deal with him, Andrej makes a really good freind. He's always there for his freinds when they need him and is willing to help. He loves spending time with his friends, but hates being alone.

BFF-Tadej
Andrej and Tadej met in Elementary school and soon became good friends. Andrej didn't let Tadej's tough extesior scare him away and he understands that all Tadej ever needed was a friend to look to care about him. Andrej looks out for Tadej, and Tadej is one of the few who always get amused by Andrej's pranks and scams. After all, seeing other people suffer is one of few things that bring Tadej joy.

Dating wasn't really a high priority for Andrej, especially knowing his potential trophy wife would get to spend all of his hard earned money. However, he found his match in Jade. Despite being the one who usually tricks people into doing what he wants, he walked right into Jade's trap. What started out as a one night stand as Andrej thought, slowly grew into a relationship.
Although Andrej isn't happy knowing Jade has so much control over him, she's really the only one who can keep up with his intrigues and keep him under control. And andrej knows that when he runs out of ideas, he can always count on Jade to help him out.

Halcyon resorts
Tasks: work in Halcyon Resorts hedquarters, TCB - taking care of business, moving paper form one pile to the other, sleeping on the job
Con artist
Tasks: scamming pepole for money
JURE! and the others
Tasks: Participating in activities of JURE! and the others

Andrej played roles in movies Lord of the Fairies, Trans-Formers I., The Mothfather

Andrej first appeared in Big Book of Lame Jokes vol.1. He was one of the 8 planned characters for the series.