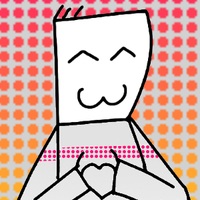 Peter prefers one night stands over serious relationships, so he particularly takes care of his appearance to be attractive to his potential lovers.

Peter is phisically healthy but he is mentally ill, so he has his sister Andreja taking care of him and making sure he takes care of his health. He did once also suffer from a case of Disco fever (106), which got successfully cured.

BFF: Scarlett
Peter never cared much for forming close friendships with others, and Scarlett is more interested in herself than others. But their common love for carless fun and parties is what brings them together. They spend a lot of time together, going out for cocktails, parties and other social events. Besides that, Peter is a movie directior and Scarlett is and actress, so they make a perfect team for movies.

Lover: Edgar (known exes: Jure, Imaginary Fairy, Imaginary Wife)
Peter was never the one for serious relationships and settling down. He's been mostly going through one might stands with random guys, mainly fairies, until he met Jure. He tried to settle down with him for a while, but soon returned to one night stands and cheating, which led to Jure breaking up with him.
Later in life he ended up falling in love with his own Inner Fairy, whom he stayed with for a long time. Things were mosttly goign well, until he met his Imaginary Wife in 1-XXXII.

Peter is friendly and outgoing, likes going to parties or different social events, preferably with his best freind Scarlett. He's nice and friendly with everyone, but has a few really close friends. Others might see him as unreliable, and they might be right too. Peter is more interested in having fun and partying than worrying about his friends, and he more often needs help him self than he is able to offer it.

Movie Director
Tasks: making movies, videos, tv shows, interviews, he has a Jutub! channel where he uploads all of his videos and movies
Tasks:
Tasks:

Elementary School: Peter was never the best of the students, but he has always been ver imaginative.
High School: Peter goes to school, works a bit with her mom, spend soem time at his dad's company Peep'Hole inc. but can't seem to fit in well anywhere. He's scatterbrained a prefers partying over work, and soon it becomes evident that something is not quite right with his brain. After he loses one of his inner fairies, he drops out of school and work. He likes to spend his time creatively and turns out to be very talented in making short videos and movies. He focuses his attention to learning all about making movies.
After School: Peter seems to get a lot of attention on his work on Jutub!, and soon makes the movie Lord of the Fairies, which is a great success and opens many doors to Peter. He now full times creates movies and shows for his Jutub! channel.

As a movie director, Peter has made many succesful movies, but also worked on other projects such as making commercials for his dad John's company Peep'Hole inc. or just making videos for fun. In 2-XV he recieves a golden bald mermaid for his work.
Peter's movies: Lord of the Fairies, Double Life, Trans-Formers I.(He also played one of the lead roles in this movie), Trans-Formers II., House of Boxes, Trans-Formers III., Fiery Passion, Trans-Formers IV., Trans-Formers V., The Mothfather He also made an unnamed soap opera about Tina and Simon in 2-LXXVI, Secret lives of Fairies (1)
Commercials he made or appeared in: Insurance Company, Moth Balls (1), Are you still hiding in the closet?, Moth Balls (2), Musical Singing Rock/Metal Bar, Random Acts of Kindness Club, Mind Games, Peep Hole
Other Random Videos: 1-I, 1-III, 1-XXXIII, 4-XV,
Among his other achievements are also winning Gegen den Stuhl race, in 1-XX it is said that was his 6th victory. He is also seen to be participating in Elevator of Misfortune in 110, but his success in the game is unknown. He also created his very own recipe for strawberry & white chocolate cake in 2-LXI. He also won awards, one of them is mentioned in 2-XV. Peter is suffering from a very damaging comdition of losing one of his inner fairies; the event is described in 5-X. The remaining fairy has a hard time taking care of all the business alone, which results in Peter experiencing a lot of weird things happening to him. As such, he is a frequent visiton of the mental hospital:
1-XXV, MH-1, MH-3, MH-4, MH-12, MH-13, MH-16, MH-24, MH-26, 5-XXXIV
pt.5