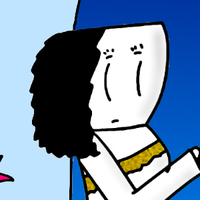 Hair color: black
Eye color: purple
Type: mole
Other: N/A
Color 1: #9100FF
Color 2: #E800FF
Color 3: #FF00EB
Color 4: #CECECE
Health: Her body is a temple. She meditates every morning and goes to spas. Spends heap of money on beauty products and healthy food, but also drinks cocktails for brakfast. It's getting to be a bit of a problem.
Clothing style: Likes to wear fancy expensive clothes, likes to show off her body. Wears a lot of makeup. Loves fashion. She doesn't follow fashion trends, she creates them.

BFF: Peter
Scarlett likes to go out and have fun, and so does Peter. He is a perfect friend to hang out with and go out to parties with. In addition to that, she's an actress and he's a movie director so they make a perfect movie making team.

Lover: Scarlett (known exes: ex wife, ex boyfriend)
Back when Scarlett was still mr. Mole, she fell in love and married a woman, but sadly this marriage ended with Scarlett changing her gender. Later she tried her luck with dating her fan, whom she met in episode 1-X and they almost got married in 2-XVI, but Scarlett realized she's too in love with herself to date anyone else, so they broke up righ there and then. She later married herself in 3-XI and owns a sex doll made to look like her who now counts as her current wife.
Episodes about Scarlett and herself: 1-XXVI, 2-XXIX

Scarlett loves being the center of attention and loves being around people. She likes to go out with her friends for cocktails, parties, social events, or throw her own parties. She likes meeting new people and making new friends. Others may see her as vain, but she cares a lot about her friends.

Elementary School:
High School:
After School: Scarlett gets her own show, Mr. Mole with the Last name Mole which is a great success. Soon after the show she changes her gender and goes into hiding, but after she stars in Peter's movie Lord of the Rings, she quickly regains her fame.

Scarlett started out as a guy in Mr. Mole with the last name Mole, but after that comic she became a woman that she is now. It was officially revealed that Mr. Mole and Scarlett are the same person in 2-XLV.

Scarlett may or may not have some magical powers, as shown in 1-XLVII and 2-LIV