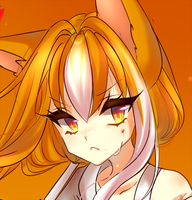 Miho Tsunebane is a "Human-Fox" being part of the Pyre Tribe, one of the three clans fighting each other in the Treachery War.
Long time ago, Miho, who still was a young child, used to spent most of her time with her friends, Rui and Kyune; two children around the same age, both part of different tribes. Unfortunately, due to conflicts between the three towns and mutual betrayals, setting each others' lands on fire, the three clans decided to start a war, separating the three friends. Many years later, Miho coincidentally meets Rui again, and convinced they can stop the war, decide to ask the Three Divinities' help alongside Kyune.
Serious, stoic and loyal, Miho's innocence and playful side has been stained with the Treachery War, and the sacrifices made on this purpose. She "can't afford" to show her feelings anymore, almost giving her a slightly tsundere attitude sometimes.