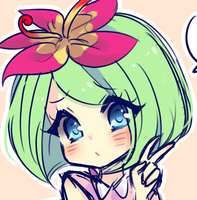 Takano Minamoto is a living life source (life producer, or any other fitting term) currently living on Earth.
She is mentored by Aasu (the personification of Earth itself, as well as another living life source), and assists her in her works to improve as a life source. Takano's destiny is to become independent in the future, to create a new life source (hopefully a planet) and take care of it. However, Takano isn't particularly looking forward to this future, doubting of her capacities and not really wanting to live this kind of life.
Takano is an innocent and shy being who cruelly lacks of self-confidence. She tries her best to do what she's told to, even though she rarely likes it. She's pretty apprehensive and sometimes has crybaby attitudes too.