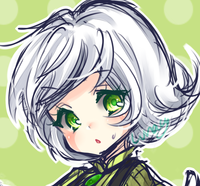 Himei is a girl working as a "magician" for the Visited Bazaar, a haunted circus secretly used for illegal purposes.
Even though she's just a human, Himei is able to use some magic thanks to a ghost always by her side, being both her magic mentor and friend. Her magic skills allow her to do a few illusion spells as well as communicating with deceased people (plus invoking ghosts). Being trapped with the ghost from an "evil" organization, the two friends are forced to work for them. Himei's job consists of invoking ghosts and spirits for them to steal from the visitors or to kidnap them, depending on their "value") while playing it as a circus trick. Despite not really having the choice to refuse, Himei is unhappy and gnawed by guilt as she knows all the horrible things generated from her job, with what the organization's customers make out of the kidnapped people.
As odd as it may seem, Himei is what we call a scaredy cat; she also has a pretty nervous, anxious nature. The rare times she feels appeased are moments shared with her ghost friend, whose name is yet unknown.