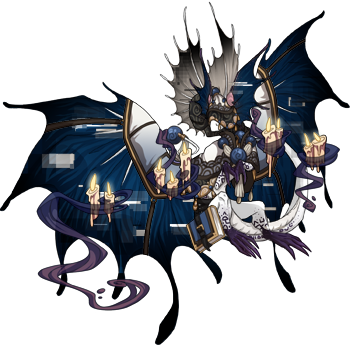 Naemi doesn't really talk about her roots, but she looks and acts way too much like her great grandmother Naomi the Gatekeeper to go unnoticed among those who know of old tales surrounding her. That's how she came to stay at Seafoam Clan, too: she was passing by with her mate when some of the clan members recognized her, which then attracted the interest of Davraseen, the clan's priest. As much as he tries Davraseen isn't all that gifted in communicating with Gods, so he was excited to talk with the mysterious Fae and have a chance to learn all of her secrets.

As Davraseen seemed to really have an endless amount of questions and help request for her, Naemi decided to stay among the Clan for a little while. Then suddenly Bounty of the Elements happened and made magical energy go haywire all around Sornieth. Very soon afterwards a peculiar little Guardian, Gawaien, also emerged from an egg. Her magical powers were something Naemi had never seen before, so she decided to prolong her stay in order to study Gawaien's condition and how it was connected to the recent events of the world.