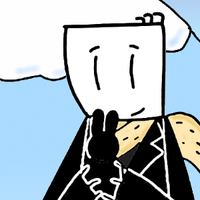 Satanic priest, Band JURE! and the others, Metal Sheep Tadej likes to make a point with what he wears. He wars a lot of black to show the world how depressed he is, and as a satanic preast he also wears clothing with satanic symbols.

Depressed Tadej doesn't really care if he lives or dies. He does what he wants without caring for the consequences on his health and he is no stranger to self harm and suicide attempts. He did also die a few times, but so far GLitter God and Satan don't thing it's his tiem to die quite yet.

BFF: Andrej
Tadej met Andrej in elementary school. He was one of few people who understood him and was at the same time confident enough not to let Tadej's offputting personality scare him away. Andrej prved himself to be a good and reliable friend, and also a bit of an asshole to people when he wants their money and that's something Tadej can approve of.

Lover: we'll see (known exes: Nina, Kiki, Christine(?), Mannequin, random girls)
Tadej wants to be loved, he really does, but it's hard for him to deal with other people. He's had a crush on Tim since high school, but Tim doesn't seem interested. Tadej dated Nina for a while and he did like her, but he was more interested in getting closer to Tim. Tadej and Nina broke up after a while and he has been trying to fill the void in his heart with oother girls. Sadly, not a lot of them are interested in him, and even the ones that are soon change their mind after getting to know him.

Elementary School: Both of Tadej's parents were very smart and sucessfull people, and Tadej never thought of being any different. He vas very smart and interested in many different things.
High School: Tadej continues doing his best. His dad is a smart man and teaches him about religion and history, but Tadej is interested in many different things.
After School: Tadej works with his dad at the temple of the Holy Satan, and also starts a band with is friends.