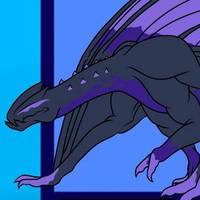 Whilst it’s certainly true that Vada is not someone you would want to annoy or upset by any means, it’s thankfully not too easy to get on her nerves all that much. She’s confidently calculating in the way she conducts herself; she knows perfectly well that she could, should the need arise, dispose of anyone she wants with little effort and thus she doesn’t see the need to fret over petty things like people who happen to be a bit on the frustrating side to deal with. Thus she tends to go about her day in a deceptively calm and casual way. Her curiosity will always burn close to the surface, as it were, and should she find something or someone of particular interest to her for whatever reason then she’ll do her best to learn more about them. In the case of individuals she takes an interest in this usually means she’ll attempt to casually integrate herself into their lives in the hopes of becoming friends.

Given her dragon ancestry it goes without saying that Valda has not only a high resistance to heat but is adept at controlling the power of fire; the fire that Valda produces, either by breathing it or conjuring it at her fingertips, has such intense heat that the flames are bright blue instead of the usual red. Her flames are not her weapon of choice, however; while she certainly CAN use her fire to fight with she usually just uses it in her day-to-day life (e.g. to light candles or heat things such as food). When under threat she’ll usually turn to one or two of her newfound strengths acquired via her self-experimentation. These new strengths are her extraordinarily strong stomach acid, which is so potent that it can digest even the toughest traditionally non-edible material, or the sheer versatility of her body that can transition into a liquid state at will. She can elongate her limbs, burst apart to avoid attack and reform herself, rapidly heal from fleshwounds and, in a particularly clever manoeuvre, sacrifice the slime that makes up parts of her own body to immobilise foes.

Valda was born as a regular dragon, one that lacked a human form of any sort. As the years went by, though, humans and human-like beings became subjects of significant interest for her. It came to her attention that she may well have more opportunities to discover new things and encounter new people should she have access to a humanoid form to call her own. Thus she began to experiment upon herself in order to make that possible, trying whatever she could to induce the desired mutation. Her efforts took a toll over her time, however. Such was her devotion to her work that she neglected to shed her skin as most reptiles need to do; this happened for so long that eventually her eyes became covered by her own scales and, thanks to the mutation she had undergone, eventually resulted in her eyes regressing entirely. Gradually her body compensated by adapting in strange and bizarre ways, resulting in her slime-like form and the adaption of her thermal ‘vision’. At long last she was able to acquire the human-like form she had strived for; given how hard she worked towards it she now stays in this form much more of the time.

One of the first friends Valda made after acquiring her human-like form. The two have been known not just to hang out in their spare time, but have also been known to team up to teach those who upset Cynthia or her family a harsh lesson they won’t soon forget.

Xenyo and Valda bonded over two factors - their mutually slime-like forms and their equally voracious appetites. Much like her extraterrestrial naga friend Valda can and will eat very frequently; this is thanks to an exceptionally fast-working metabolism.

Crux is often feared by others thanks to his unusual appearance. Valda is not put off by the physical appearance of others in any way, though, given the fact that she has no eyes with which to physically see them herself.