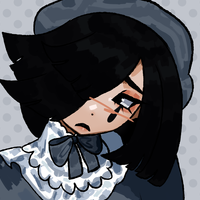 a very gloomy mime. he feels uneasy around most people and rarely ever speaks. The only person he speaks to is peppy, and even then it'll usually be in whispers
he communicates mostly through . well. miming & gestures. although, miming has never actually been his passion. He's pretty shit at it & this can lead to confusion/misinterpretations. Sometimes he'll communicate through writing, in which he can be very blunt and harsh which catches people off guard