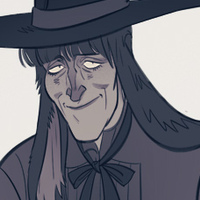 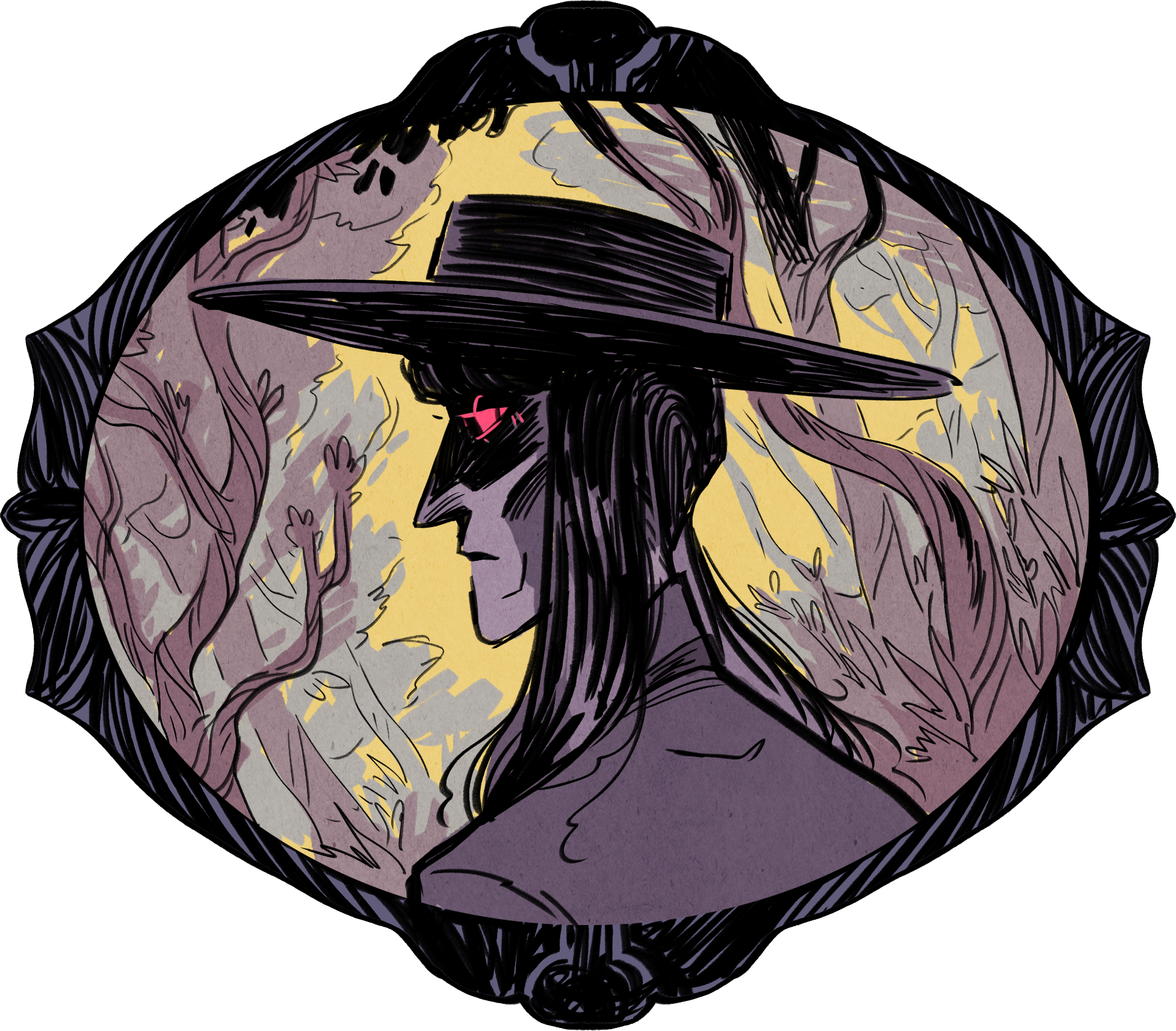 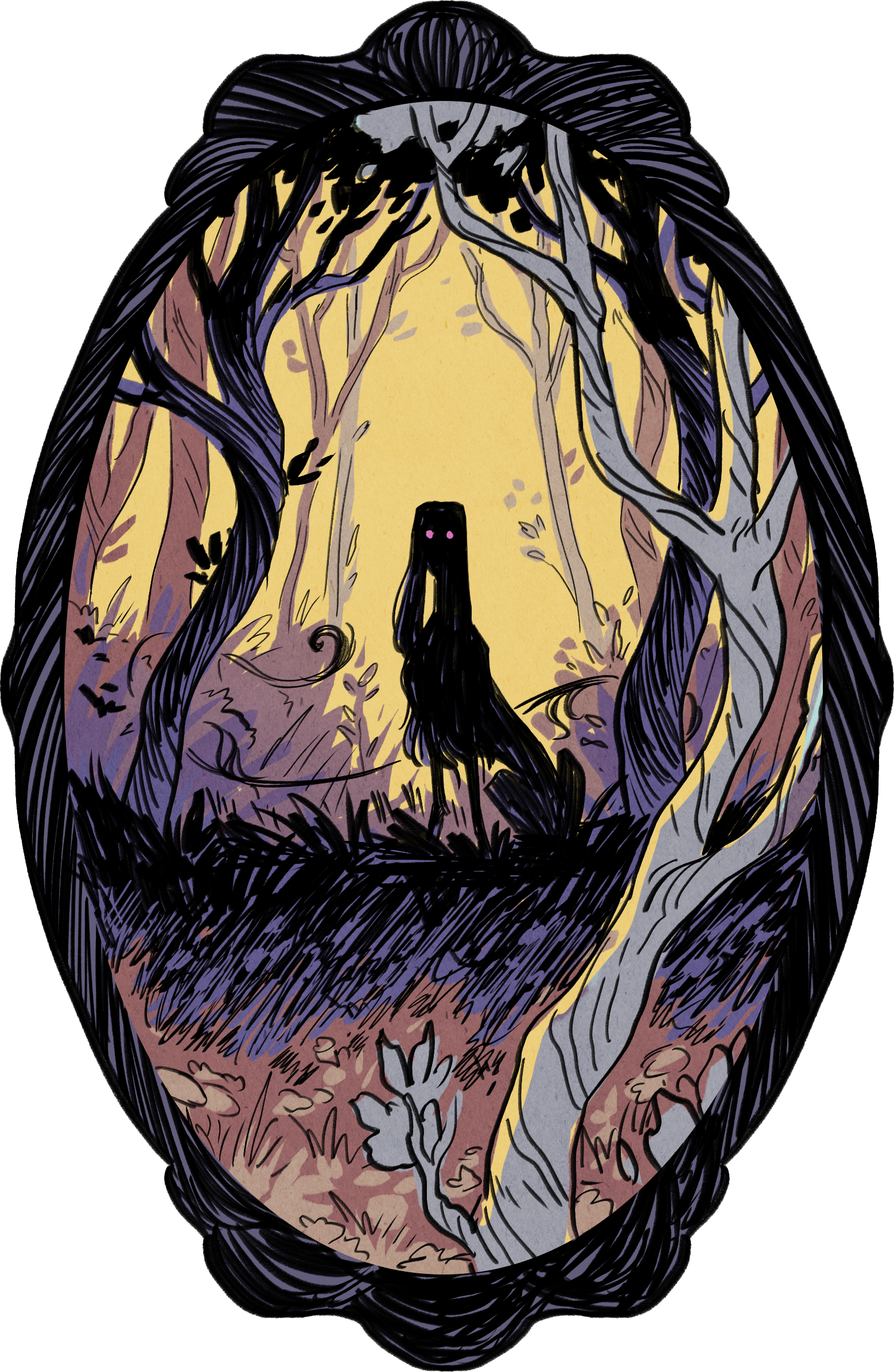 Deg belongs to the Widderwood worldbuild and is the prominent cryptid that lives in the forest next to a New England, Victorian-esque town.

Degaré was originally born from sacrifice, created by fae to guard a medieval forest crossroads from human encroachment. Though he was able to do his job for some time, he was eventually exorcised from his land before being adopted by a high ranking fae on a challenge.
Over hundreds of years he was guided through many teacher’s hands while traveling in between. After taking on a job as a familiar then later losing his witch to an accident, he sought employment writing fae and human culture and biology books for the library sphinx and pursued a messy relationship with another author.
Upon escaping the relationship, he moved cross country to settle into the section of woods closest to Darlington, a growing rural town right outside a port city. He became a well known cryptid in effort to protect his new territory and now spends his time helping misplaced fae, researching, writing, and sneaking among the local humans to run errands, enact fae deals, and cause mischief.

He is hard to get close to, keeping others at an emotional distance while trying to maintain a false mask of confidence and disinterest. In reality his soft heart makes him become attached to others quickly. He shows his affection in less direct ways by leaving gifts and doing acts of service. The pink apples he leaves around town are intended as gifts to others in recognition of behavior he appreciates and a comforting gesture to the dead or dying.

Deg's true form is that of a large black dog with a human face. His humanoid body closely matches his true form- an elongated saluki-like body with gaunt face and hands. Teeth are sharp and pink, large, tired eyes pierce others from afar, and long ears commonly mistaken for hair. A pungent lavender scent follows him around, which may be annoying to some. He shows many dog and cat behaviors by being light footed, loyal, independent yet curious. Movements are fluid, precise, and theatrical when he's focused and has his mask on, but if he can be taken by surprise his stature will change to closed in, submissive, pensive.

*Can smell approaching death on people and have a decent feeling of how it may play out.

Deg often puts his self care to the side to work himself to the point of exhaustion. When he allows himself a moment's rest he enjoys having access to many creature comforts. Stepping into his pocket dimension home reveals that he is highly domestic despite his, at times, feralist behavior. When others are in his home he is rather courteous and patient despite any intimidating aura he gives off. Always one willing to give advice, directions, and food- before a swift kick out the door into a random spot in the countryside if insulted.

Using a human disguise, he often reads oracle cards in the Darlington or Leyton alleys or keeps watch over his graveyard while sketching in a journal. Locals consider him an odd, anti-social traveling artist and mostly avoid him.

His primary interest is learning about the world through art and writing. He is an established author, commissioned by a sphinx to continuously write & update biology & culture books on both humans and fae. With his high curiosity, he'll poke his nose into anything that catches his eye. Deg is able to paint a bit with the typical oils or watercolor, but mostly does ink & graphite drawings.