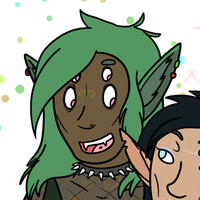 ‘She’s pretty hot. Do you think I’d have a chance if I asked her out?’

‘Oh— she’s had some bad experiences with boyfriends before,’ Ka’harja muttered. ‘She’s not really looking.’

Finishing his drink, he handed the cup to Ka’harja. ‘That’s not a no! I’m gonna go ask!’

Before Ka’harja could respond, Raidus hurried off to talk to her.

Stars flinched when he walked up behind her, and he quickly apologised.

‘Oh, sorry, didn’t mean to scare you,’ Raidus chuckled. ‘I was just talking with your friend over there and couldn’t help noticing such a beautiful girl out here on her own.’

‘Thank you,’ Stars mumbled, brushing her hair out of her eyes with a hand. ‘You look nice as well.’

‘Thanks, I’m Raidus Yuitami,’ he grinned and held out his hand.

‘Stars Beesa,’ Stars shook it gently, then glanced around. ‘My son is around somewhere. His name is Little Demon.’

‘I’ll keep that in mind,’ Raidus replied. ‘Where’s his father?’

‘I’reka,’ said Stars. ‘He’s got another family to live with.’

Raidus looked awkward for a second before his grin came back. ‘Sounds like my cousin.’

Stars laughed at that.

‘You know, I’ve got royal blood in me. Do you have any royal in you?’

Stars’ ears twitched curiously. ‘What do you mean?’

Raidus gave her a wink, and a cheeky grin, and Stars seemed to realise what he meant.

Her ears stuck upright and she bit her lip, blush creeping along her cheeks until her face was bright pink.

‘Is that a yes?’ Raidus chuckled, leaning closer.

Stars giggled and covered her face with her hands.

Raidus gently pulled her hands away and bent down enough that he could bump his nose into hers.

Stars let out another giggle, and looked away. ‘I— excuse me for a moment.’