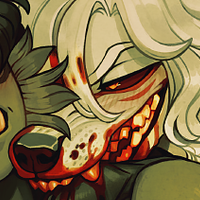 "I don't need friends, they disappoint me"

Annan is grumpy and cynical to the core. He hates people and he isn't afraid to show it. He is extremely intoverted and prefers to work and be alone and gets exhausted really easily if forced to talk to people for too long. He tends to hide his terrible attitude behind a stone cold pokerface for the most part, playing nice until someone pokes him a little too hard (which isn't hard to do at all). He has absolutely no patience for people and will lash out fast and hard if provoked. His lack of empathy makes it really hard for him to realize how much he has hurt someone or even care when he does. On top of all this, he has an incredibly sick sense of justice and will hurt/kill those he believes deserves it. Yes I said "kill" this man is a full fledged murderer :flushedemoji:

Had feelings for a certain cat :heart: cat hurt his feelings :brokenheart: he went all yandere psychopath like ashfur in warriors :knife: cat in basement :flushed: timeskip and now things are all better with cat and cat is his whole world and cat likes him back :pleading: :revolvinghearts: