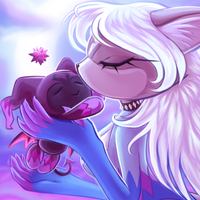 In the Sonic AU she is a dark witch and a misunderstood/tragic villain trope from Blaze & Silver's timeline. She is motivated by disgust for her surroundings and turns everything in her wake to crystal, which is unquestionably damaging to the environment but is also regarded as strangely enchanting and beautiful by those who see it. Her personality is destructive and avoidant, she is generally fearful and mistrusting of others.

At the start of her adventure, she has no relationships with anyone except her chao (dark/flying/flying) named Psyche who she treats protectively like a baby. Most of her encounters will end with her running away to continue pursuing her goals. Her chao mirrors her feelings and sentiments of disgust and fear from lack of understanding and eventually she sees the toll its taking on them and changes her ways with the encouragement of others. Through gradual rehabilitation she learns to use her power creatively instead.

She is neutral with the Sonic team, but tends to listen to what Sonic and Knuckles have to say since she views them as realistic. Views Tails as a child, disregards/ignores his intelligence (probably much to his dismay). She is a bit more sympathetic of Rouge and Shadow and starts to see them as friends, or at least people she can express herself to, especially Rouge who she has much in common with. While she respects Blaze and Silver, she has trouble understanding their idealistic approach and tends to become frustrated where they are involved. She clashes heavily with others who have strong interfering goals, such as GUN, Eggman, Infinite, etc.

The other AUs are "just because" designs and they have no inherent storyline attached, but you can click an image to read a bit more about how I had imagined it.

I split her personality to create Yukina and Sayoko, therefore her human form has no use and is just here for reference's sake.