A mysterious woman known for her cruel attitude. She was once idolized  for her youth and grace, but now nobody is sure who she really was. Her  true name is nothing but a memory of the past. Her clothing style is  bewitching and may include anything from cyber goth to tribal elements.  She is rumoured to have the ability to cast hexes upon others.

When she is human, her fur becomes white and indistinguishable from her hair and her markings  become henna tattoos- she can be seen with or without them. Note that  while not a shapeshifter, she can exist in various universes and so may  appear in several different forms. 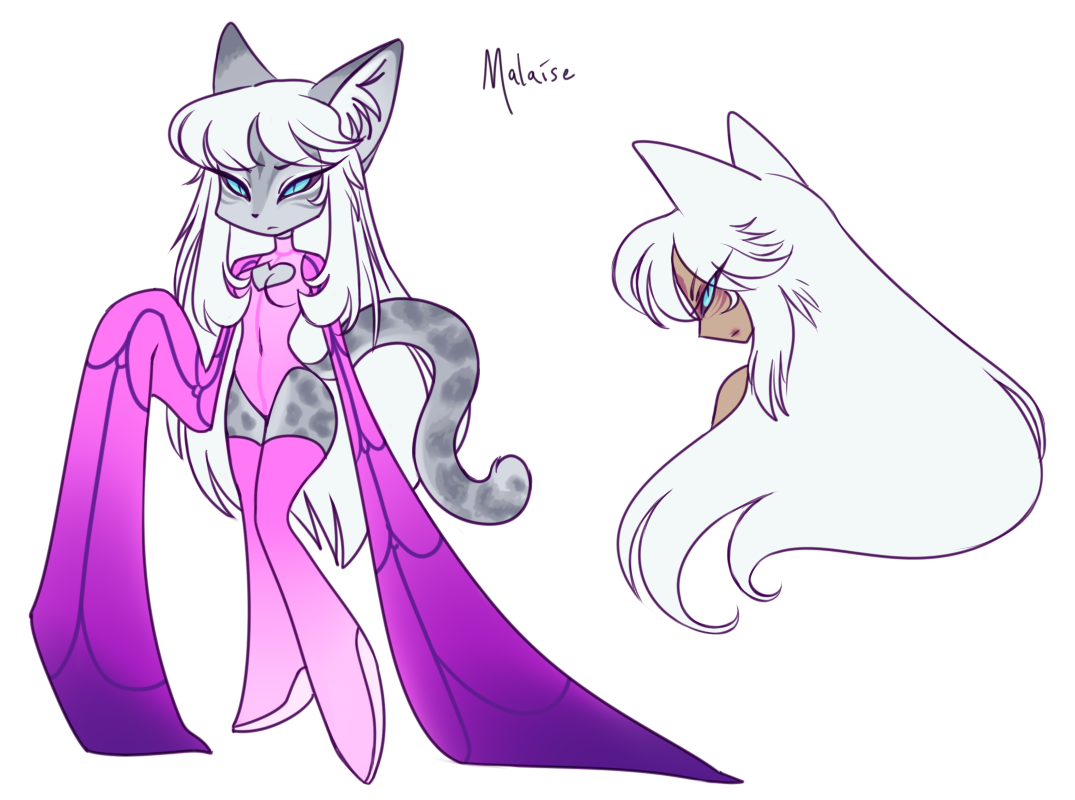 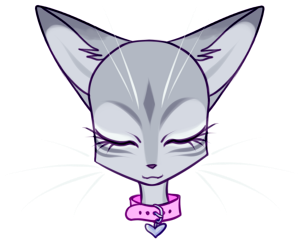 Round and friendly face-shape with large pointed ears. She is covered  head to toe in extremely fine, tightly packed fur. Her facial markings  resemble a light mask with a diamond in the center of her forehead and  two darker stripes under each eye. Her whiskers allow her to sense  subtle changes in the vibrations around her.

Her senses are highly refined and she is always taking in her  surroundings to the fullest extent. Curiously dark almond-shaped eyes  with bright blue irises and slitted pupils- often used for glaring  accusingly at others, but are remarkably suited for night-vision as  well. Her eyelashes are naturally long, although she clearly applies  makeup to get such an extreme effect. She has a small dark nose which  can detect most scents, and her mouth is soft and pink and full of sharp  teeth. Her tongue is round and human-like, but still rough and  sandpapery like a cat's. She is allegedly so sensitive to taste that she  can't bear to eat a majority of food she comes across. 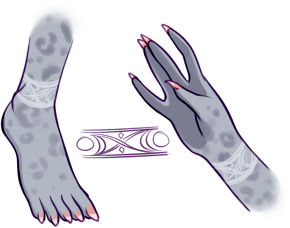 Her palms and soles do not have pawpads, instead they are covered in  soft skin, heightening her sense of touch. Her wrists and ankles have  light bracers tattooed all the way around them that resemble Celtic  engravings. Her nails naturally form a claw-like shape, but are too dull  to do any serious damage.

Long and semi-prehensile, but too weak to carry any weight; it is  mostly for balance and flicking wildly back and forth when she is  irritated. It appears to be the only part of her body where the fur  becomes fluffy and dense, and is rather well insulated. 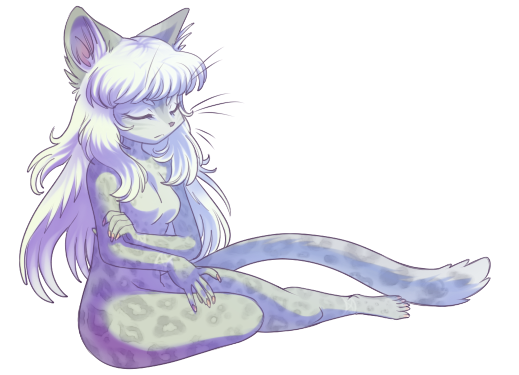 "Proper," "strict," and "uptight" are all words her associates would  use to describe her- she is very easy to make fun of in how serious she  appears. None have observed her to be angry or upset before, only as  though she has a stick up her ass. She does have a passive gentleness  about her however, appearing breezy in her movements when she's left to  her own devices, but would become stiff again were she to be obstructed.

She is very bad at relationships of any sort and often isolates  herself. In jobs she usually earns the placement of "teacher's pet,"  which leads to both admiration and contempt from her peers. However, if  she finds herself in circumstances where people look up to her, she  tends to sever ties.

Submissive position more often than dominant, this doesn't mean she's a  pushover however- she has a cold exterior and doesn't easily give into  people, she's just more comfortable being under a position of authority  or isolated entirely.

Dry or deadpan. Rarely sarcastic or imaginative, and more often just  cutting remarks, though its unclear whether or not she feels strongly  about such statements. She tends to be seen as a buzzkill by others and  is used to the alienation.

Cultural relativism, right and wrong is determined by the particular  set of principles or rules the relevant culture just happens to hold at  the time. You can count her out of questioning authority unless she  perceives them as going against the grain!

She has a moderately sized collection of trinkets and artifacts which  seem to get very little use out of them, but are meticulously sorted for  display. She is knowledgeable with various species of plants and has a  spectacular green thumb. She's good at mixing drinks and brewing  potions, yet somehow manages to be a terrible chef...

+Devotion, she shows loyalty to those she trusts and will work dutifully to achieve beyond what is expected of her.
+Honesty, she speaks her mind regardless of how it is perceived by others.

-Inflexible, she needs things to fit a narrow pattern and may become erratic when they do not.
-Manic, she can appear to be in a rush once she sets her sights on something, making it difficult to get through to her.

Quiet and pleasant, but firm. No noticeable inflections, almost monotonous.

Very upright and exact, she expects too much of herself and won't let loose.

Very understated, her face is usually blank and her arms stay at her  side. She might widen her eyes if you do something particularly  offensive!

She always smells of different herbs and hygienic products, her natural scent can (sadly) barely be detected.

Speaking so fast that she trips over words, wringing her wrists and  rubbing her neck, completely restarting on something if she's  unsatisfied with her work, occasional twitching, and excessive  grooming... even for a cat.

No doubt she is quite attractive, she seems well aware of the agreed  upon consensus despite how put off she is by others mentioning it. Why  can't she just take a compliment?

She has undiagnosed OCD characterized by contamination (cleaning and hand-washing compulsion), appearance (grooming, not weight), sorting and organizing repetitively, eating (textures and strong flavours), severe rumination, and other invisible mental rituals. Although she is by all accounts a stable person, she can quickly be pushed to her edge if enough things are setting her off.

Acute, she is well taught and open to new information. Thanks to her furious categorizating habits, she also has access to a lot of information even if she doesn't know it off-hand.

Sound, she is good at managing information and holding onto it, though  she does have a few blind spots; namely with personal details. She is not good at keeping up with relationships or social statistics and will  easily forget names, faces, connections, and so on.

A lot, honestly! Most of them are unsanitary surroundings, disorderly  conduct, repetitive sounds or incessant talkers, being stared at, and  being touched too much or too frequently.

She has had issues with alcohol in the past and so she purposefully  restricts herself from it, heaven forbid if she were to slip on this..

Tidiness- sometimes to the point of being unable to continue serious  matters without drawing attention to it and/or having it removed- which  she is more than willing to take into her own hands for her own peace of  mind. This can cause her to be perceived as rude, especially when she  points it out to higher-ups.

Although she hides it well, one of her biggest fears is that everyone  hates her and that she will end up completely alone in life; but above  all she dreads lack of control and losing her own sense of self. She  stifles one fear to give preference to the other.

Has a sort of spiritual sixth sense which goes beyond typical empathy.  She can predict certain events and read other people with fairly  accurately, it spooks her frequently.

+Limber, her body is slight and mobile, making her capable of getting to places ordinarily inaccessible.
+Perceptive, she is a sharp pattern-seeker and will notice things that others normally wouldn't.
+Keen senses, she is in tune with sights, sounds, and smells and will pick up on subtle cues.

-Physically weak, she can carry her own weight and not much more.
-Lack of endurance, she is highly specialized for managing her work, but long term travel not so much.
-Easily overwhelmed, if there is too much going on for her to process she will check out, physically or mentally.