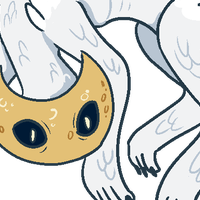 Clouds Over the Moon

Clout is a tired listless creature that prefers to float over walk. They are very cat like, loves saucers of milk and is very lazy at their job-which is good because they are a demon who causes seizures.

By the time Clout opened his little new born eyes, there was already a wide array of night themed gods and demon lords. His appearance put the heavenly and hellish courts in a scramble, why did he look like that and what was he a creature of? They double checked their records to see if there were any open positions while Clout took his first victim. Curling around a nurse maiden's neck a cold sweat came about her like mist on a moon lit night and her world faded to a fuzzy white as soon as he put her tiny fluffy paws around her ears. It was then that they knew Clout was a powerful demon even if he looked cute in his after seizure nap.

Clout is a fully grown adult however, despite being able to grow or shrink his length to fit any neck he prefers to average around a  small five foot length which makes people think he's much younger. His coat is a silky smooth pure white and long like a snake. Interspersed are pure white slightly translucent feathers that converge around his spine, shoulders, ankles and tail tip. His hands have black paw pads and four fingers that are surprisingly human like while his feet are clawed and more cat like with 3 toes. Most interestingly however is his bright yellow crescent moon shaped face and his dark black and yellow pupil eyes which look as old as he truly is. He does not have a mouth but he does have two nostrils.

Clout doesn't have wings but his feet almost never touch the ground, thus they hang in a lazy relaxed fashion that only adds to his cat like appearance. His movements are graceful and ribbon like, he moves like an eel through the air.

He loves his job truly but,,, naps are so much more rewarding.
Although his fur feels like silk if you pet it too long he'll start to feel wet.
Fur is incapable of getting dirty. That's just that.
Not rude per say but definitely not a kind fellow, he thinks it's fun to give people seizures :(
Doesn't speak much but when he does his voice is squeaky and high pitched.
Only a young adult but has stopped aging.
Background image credit, side image credit

It's okay, You're okay - Bonjr