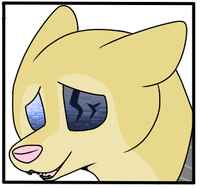 Lucky is a sand vorox with light tan fur.  He has lighter tan fur around his eyes, cheeks and muzzle as well as his underbelly and underside of his tail.  Lucky has pinkish tan scars all over his body but not on his tail or face.  He has a X shaped cut near the end of his tail.  He has long backwards facing ears and dark blue eyes with a pixelated appearance and no noticeable pupil.  His left eye looks much darker and has no light to it.  The screen is cracked and completely unusable.

Lucky is a quiet and somewhat withdrawn individual that shys away from strangers.  He is known to be a bit fidgety, jumpy and distrusting.  Lucky is not one to speak often or interact a lot but he does enjoy being around those that he trusts.  Lucky sometimes has difficulty forming sentences or pronouncing words correctly.  When he starts to mess up he looses confidence and starts stuttering, which makes it even harder for him.  Lucky has difficulty picking up on social cues and body language from other vorox, leaving himself and others confused.  He feels disconnected from the rest of the world, its a constant struggle for him to communicate with other pack members.  Lucky has a habit of not speaking whenever possible, giving responses by simply nodding.

Lucky is extremely loyal and trustworthy, always going out of his way to make sure others are happy and pleased with him.  Lucky is incredibly selfless and very forgiving.  He is a hard worker and will use his work as a distraction.  He is easily pushed around and mistreated, he will not stand up for himself and will take on extra work just because someone demanded it of him.  He hates conflict and encourages others to not defend him.  Lucky is perfectly content being of a low rank within the pack and being told what to do.  Its what he is used to and he knows what to expect.  Lucky is not confident enough in his skills to be a good leader.

Lucky was captured by skrall when he was very young, probably less than a week old.  He grew up with very little direct interactions with other vorox and developed issues with communication.  Although he naturally knew the vorox language like all vorox the lack of practice caused him to have difficulty remembering the meaning of words or forgetting them entirely.  Since he rarely spoke he is far behind in practice and often struggles to pronounce words correctly.  Even though he could not speak it he did learn nearly all the meanings behind the words of the skrall language.

When he reached around a year old he was able to interact more consistently with Jax.  Since both of them were rather socially inept