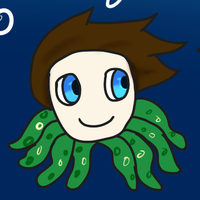 Shocktopus is an unholy abonimation that I created on the 21st September 2014 during a drawing practice labelled as "EYEZZZZ". On the page was an absolute masterpiece that included Luna's face, some random girl with the biggest anime eyes....

Shocktopus, then called Shane the Octopus, was created as a result of me practicing drawing eyes and giving up and adding tentacles. Thus came the birth of our lord and saviour.

I forgot about our lord until last year when I found the journal I drew him in, and I think I might have transcended to another level. He was re-dubbed as Shocktopus. Then I forgot about him again.

Then earlier in August 2018, I found him again and I transcended to a completely new level of humanity. Think of the brain meme and the last brain is me when I see Shocktopus.

He is absolutely a blessing, a lord, a saviour and all. I have resurrected him and he is here to stay. This may be good or bad.

This year, 2018, is his four year anniversary. 4 is a lucky number. This is dank. We must celebrate somehow.

Amazing story:
Shocktopus lives in the Irish sea. He swims around happily. He is unaware of his beauty and pretty much everything else. Shocktopus exists and he is a thing to be awed. Every sea creature stops and stares at this beautiful thing when they see it. Merfolk everywhere see him as a good luck charm. Scientist divers have only ever captured this creature on photographs and films. They say that if you attempt to capture him, he'll probably go with you so the merfolk try to keep him away from fishnappers. He feeds on prawns and would probably deshell them like the epicurean that he is. Shocktopus is a social creature and isn't aware that he is "different" to the other octopi/merfolk. He just kind of exists.

Random creatures in the sea often come to him asking for an autograph, and he always gives one, without actually knowing why they love him so much. He has adoring fans but he is completely unaware why.

No matter how angry, scared or sad you are, as soon as your mortal eyes  gaze on our lord and savior Shocktopus, your heart fills itself with  joy, peace and spiritual enlightenment. All hail the saviour!

Shane Spark and Shocktopus do not exist in the same world. The world would implode on itself if that were a thing

- Shocktopus is aware of Hòa. He sees her as a magnificent creature and a mother

Shocktopus is a sea captain! He owns an underwater ship and he brings home riches from his extravagant journeys around the Irish sea. By riches I mean nice looking rocks.