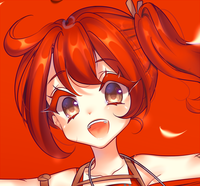 Rui Nousaku is a human being part of the Zephyr Tribe, one of the three clans fighting each other in the Treachery War.
Long time ago, Rui, who still was a young child, used to spent most of her time with her friends, Kyune and Miho; two children around the same age, both part of different tribes. Unfortunately, due to conflicts between the three towns and mutual betrayals, setting each others' lands on fire, the three clans decided to start a war, separating the three friends. Many years later, Miho coincidentally meets Rui again, and convinced they can stop the war, decide to ask the Three Divinities' help alongside Kyune.
Optimistic, obliging but also pretty naive, Rui oddly succeeded in keeping her positivism despite the war; it actually looks like that's the case of lots of members of her tribe, who are (in general) calmer and wiser than the two other clans.