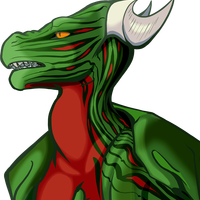 The only third generation Mutakar of the group. Generally more passive than the rest, and more lacking in raw power and stamina.

A balanced, heavily set form, 234 cm in height with a primarily deep green coloration, accented with a bright carmine belly and accents while in his natural Ertakar form. In his human form his build remains about the same, with dark sepia skin, broad facial features, and long black dreadlocks.

Generally even tempered, not as quick to bursts of rage or bloodlust as the rest of his colleagues.