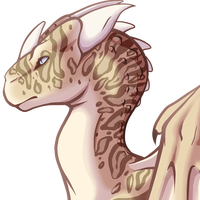 Not the oldest, but considered the most seasoned member of the 'Mutakar' team.

As an Ertakar he measures at about 9 ft in height, with a broad build, and 3 sets of horns on his head. His coloration is mostly Beige, Ecru and Cream, with cream for his underbelly, Beige for his primary color and Ecru that make up the ball-python-like markings that travel down his body.

At first glance, he appears stoic, the sort that comes across a bit 'married-to-the-job', extremely focused and precise in his work, with a strong personal moral compass. When capable of dropping the work focus for a bit, he becomes a bit sarcastic or even snarky, which can be a bit jarring next to his stiff professional countenance.

As skilled in combat as the rest of his colleagues, however he is considered to be the most in control of his 'berserker' state, while still being of considerable power.

Spends a bit too much time in his work, but when he has off time, he enjoys the novelty of board games, particularly ones with a very specific or unusual gimmick.

Like as required of Mutakar, he was born and raised into the military and taught specifically to serve in the unit. While like the other Ertakar, he was exposed to other fields and interests, but unlike most of them, he felt personally contented in the field he was in.

-- As the conflict with the insurgent anti-Ertakar groups grew, it became clear they would need close information on them instead of just shutting down every meeting place they came upon. This lead to the motivation of having one of the Mutakar use their human shifting to study the group long-term, Siris was tasked with this mission. His stoic nature and more unassuming appearing human form, as well as his control over his own berserker tendencies, are what made him the best candidate for the job of infiltrating the insurgent group.