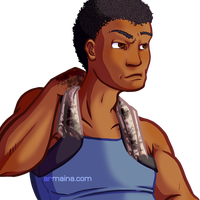 The essential mechanic of The Lollipop. Even-tempered and pleasant, he is also what one might call the most 'normal' of the crew.

5'9" stocky build, not clearly toned but sometimes apparent when flexing, not unlike a blacksmith. Olive skin, short or buzzed black hair, though often wearing a beanie or other hat.

Generally pleasant and reserved, not much of a social butterfly but not exactly recluse, mostly preferring interaction in small groups.

Doesn't act quickly to anger but frustration and irritation can be easily seen if pushed. Won't hesitate to use force if the situation calls for it.

knowledgeable in small to mid-sized starships, capable of keeping the Lollipop in top form from jump to jump.

While being a mechanic is his job, it is also his hobby. When not working on the ship itself, his downtime is spent conceptualizing new features of a dream build or two. He also dabbles in experimenting with new technology when he has the time, parts and money for it.

Both parents were pilots of sorts, which allowed to grow up around ships and heavy equipment, where he quickly found a love for tinkering, taking things apart, and fixing it again.