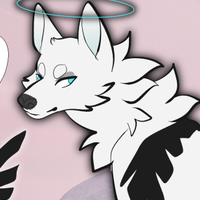 Mute, graceful; Gabriel is the silent minister of the Church of Ashmedai and the second-in-command of the church underneath Octis. Gabriel is a mid-ranking angel and acts as the executioner of Octis' will in many instances. They are not nearly as strong as the priest, though can control the actions of others to an extent. The canine joined Octis under the promise that they would prosper and become an enlightened, stronger angel.

Gabriel has always sought to better themself, striving to reach higher ranks in their spiritual awakening. Through their path to this, Gabriel has had many second thoughts in joining Octis - largely due to being ordered to use force on resistant patrons by any means necessary. Their method of choice is to control their target's movements, almost like a puppet to avoid physically injuring the one being controlled. The target remains fully cognitive during this. Sometimes however, this non-violent method is not an option. Other abilities, such as telekinetic force or the conjuring of blue flame to scorch are at Gabriel's disposal. When not answering to the duties of the demonic secrets of the church, Gabriel spends a large amount of time quietly tending to the candles or playing the immense organ on the second floor balcony of the cathedral.

FAQ: Gabriel is Ghostyle from Neopets! I adopted the design from corbinww / undisdained in 2015 on the terms that they be renamed as they still use the  character for a current project.