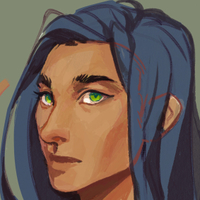 (in a non-fantasy real world setting, she would be Armenian American)

Married to Dagmar, mother to Shepard, Agnes, and Magna.

Aravis was born into the Ondiurse royal family.
A coup d'etat happened when she was about 5 years old, the royal court was murdered except for her and her elder sibling, Atlas, thanks to their parent's close friends, the Morgans.
In the coming years, the Morgans raised and protected the two siblings, and eventually aided their reascension to the throne.

Atlas as the elder presumed role as King, and Aravis who had a distaste for politics climbed her way up to being the General of the Royal Guard, where she seeks to support her sibling with military presence.

During one of the new recruits training season, Aravis's old acquaintance, Dagmar, gets recruited as a training mentor.
Aravis, despite begrudging stubbornness, grows close and intimate with Dagmar. The two eventually marry and move to Dagmar's country to settle down and raise three daughters; Shepard, Agnes, and Magna.

What follows after is a shit ton of spoilers.