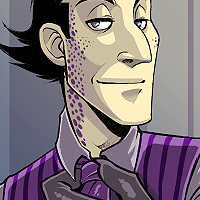 Pale skin, decorated with a multitude of spots, mostly concentrated around the shoulders, neck, and down his back. Black hair is short and normally slicked back. Eyes are a dark, dull purple. Hands are clawed and are colored black, with same-colored speckles trailing halfway up his forearms. Fins stick out from his wrists, head, and backside. Fins and fingers both have a dusty light purple webbing. Tentacles are roughly 5-6 feet long, and are a rich, dark purple with small, lighter spots. Age is in the early 40s.

Originally just a normal Spy hired under BLU, he suffered an unfortunate accident that involved a saw blade, his torso, and a sadistic medic. He was kept alive in his leg-less state via said medic's methods and was experimented on, then was repeatedly forcibly sent through a glitched respawn system. The final result of which being his current state, though his memory was rather shot from the ordeal.
The medic eventually grew tired of him and had his assistant take him off elsewhere. Claude was unconscious at the time.
When he awoke, he found himself in a small pond between two sewer systems with the assistant trying to feed him a story about how he got there. He believed him, of course - though afterwards he brutally attacked, killed, and ate the other man.

Normally keeps to himself unless he feels threatened. Reacts with hostility in such cases, but avoids fighting. If around friends (or other such trusted company) he is a bit more laid-back and chatty.

Tentacles will regenerate/heal themselves if injured. Larger injuries take longer to heal, obviously, and a cut-off tentacle will take at least a week to grow back.