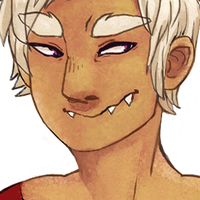 Sand dragon, masquerades as a djinn with the appearance of a human in his 30s-40s. Voice is deep, rumbly. Able to change his accent at will, but defaults to what sounds like the hellspawn of Cockney and Aussie. Enjoys mistreating/tricking others. Doesn't enjoy being around beings with more power than him. All-powerful, though is extremely claustrophobic. Also gets a little short-tempered in regards to anything related to what happened with his former mate, who left him after he refused to kill his "pet" incubus-- said incubus' ancestor was a dragon hunter.

Human form: 7'7". Built like a brick shithouse. He can take most any hit thrown at him and counter it twice as hard.

Dragon form: MASSIVE. Like cruise liner massive. Can and will crush your shit.