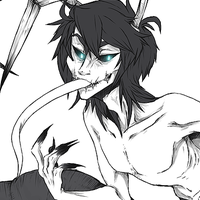 Raised by older brother after parents died; abuse eventually occurred. Series of events put in motion by his desire to get a sort of 'revenge' on his brother later in life resulted in an accidental possession-turned-fusion with a centipede taur; mind occasionally relapses to that of the body's previous feral owner. 'Moved out' of childhood home to live in the wilderness, trying to find some way to keep his more feral half at peace. Currently lives in a small cave and is fiercely protective of his territory.

Cautious, territorial. Becomes rather curious and affectionate once used to someone. Enjoys cooking and foraging. Dislikes bathing and being snuck up on. Misses living in a home with a kitchen. Talented chef, decent hunter. Sleeps like a rock, does not notice intruders unless his ever-alert antennae brush across a moving target.