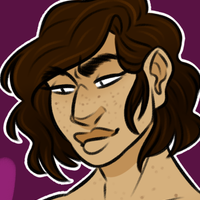 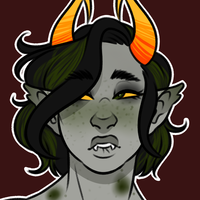 Alscia is a tough but loving person, capable of taking care of herself, but sometimes left wanting for affection. She used to live with her moirail, Sevrik, in a large city, but soon left for fear of his health declining because of the pollution. What she almost missed was that Sevrik had gotten cozy with Takaio, a hooker who frequented the bar she had sent Sev to while she had packed up their belongings. The two of them, after an awkward start and a little heartbreak, actually hit it off quite smoothly. She didn't mind, seeing as how she'd desperately wanted Sev to make friends of his own, but soon she became quite jealous of Takaio for "stealing" him away from her.

Trying to ignore how her heart felt, she became friends, and too quickly started dating, Takaio's moirail Hyrina. The two had a bit in common, but besides that they were quite different. The relationship was strained when Takaio's ex-matesprit, Rahart, started flirting with her. She knew she was supposed to be loyal to Hyrina, but Rahart's allure was too strong and the game he put on drew her in. After a painful breakup with Hyrina, Alscia began trying to ignore Rahart altogether, but the two of them simply had too much chemistry and she fell hard for him. The two of them flip from black to red a lot, with them both unsure of their true feelings.