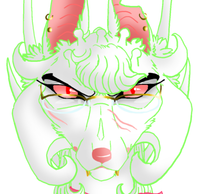 She's Pagan. She mainly worships Greek deities, like Selene (moon goddess), Gaia (nature goddess), Tethys (sea and underground river goddess), Zeus (god of the sky, thunder and lightning), and the Norse god she's named after, Loki (god of mischief). She's also a witch and she likes to use herbs and stones to heal others from their illness(es).

She's a huge fan of singer Elvis Presley. She's an amazing singer herself, but not interested in becoming famous.

While she's actually pansexual, many microbes mistake Loki for being lesbian when she openly walks paw in paw with, or touches noses with Willow.