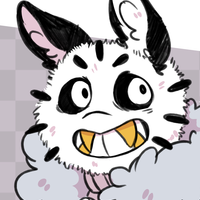 Copper was the parasite, Carmen was the host– but the line quickly blurred, thanks to the Jorunna parva’s influence on the skeleton’s form. The fluff that covers his body is made up of lots of thick, soft spines, with the ability to stiffen and become more like quills that can and will detach and get stuck in whoever is stupid enough to touch him in such a state. The black quills are full of poison.

Formerly the “breeder” for a parasite hive, nowadays he just lays around and sleeps when he’s not at home taking care of his children and hanging with friends. He’s usually very laid-back and passive, but he tends to have a misplaced sense of justice; he will oftentimes insert himself in situations that he doesn’t belong in.