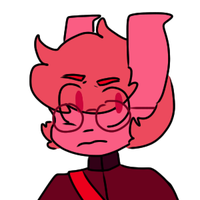 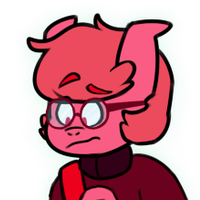 Not initially, no. The natural tendency is to assume Sero is excessively loud, downright mean, and asburdly violent. He's quick to go to blows (er, biting, actually) and readily swears at people and calls them names. One wonders how the guy gets anything done, as is.

His social skills and communication are lacking, to say the least - Sero can barely formulate asking someone to do something for him, often making vague motions towards what he'd want and then getting upset when the recipient doesn't understand immediately. He has a wavering sense of identity, often flipping between what seems to be a semblance of personality at the drop of a hat, turning from relatively calm (albeit with a glare) to biting out someone's jugular for no apparent reason. He tends to try to mold himself to the desires of the people around him, and feeds off positive, loving attention, which is the only time he's actually docile.

Due to his slew of untreated mental issues, Sero doesn't have a lot of friends. He's included with the rest of the Quintet and the others appear to like him well enough, although those outside of the group whisper that he's just barely tolerated at best, and is only around because Endorphin and Melatonin's absences mean Norep and Dopamine struggle to shoulder the work. Sero pretends he doesn't hear these, or that they don't bother him, but in reality they only add to a well of terrible self-esteem. Sero knows something's wrong with him, but doesn't even know where to begin to start fixing it, and fighting the overwhelming impulsiveness and sense of dread building in him is just too exhausting. He tries, but he knows it's never enough, and eventually he did give up - just letting the wash of instability take over. It was easier to let it have control of him. Nobody noticed or cared, anyways. 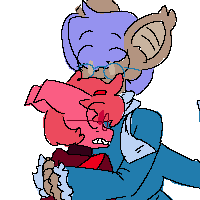 Except until someone did.

Norep, the member of the Quintet often accused of being a nervous, useless wreck, is Sero's closest friend and true confidant. The two's relationship is bizarre: Sero bites Norep, screams at him, struggles against him at times - and yet Sero fights for Norep, goes to blows against those who insult Norep, and still holds him tight when the other is a shaking, whimpering mess. Dysfunctional doesn't begin to cover it, but the two seem drawn to each other like two half-broken magnets. It takes effort to recover, to fight the mountain in his chest, but Sero will try for Norep's sake. Even if he struggles to communicate that, he'll do whatever it takes to make sure he's someone Norep can be proud of for dating. And while Norep offers him a hug to cry into, Sero will help him with the struggles of assertiveness.

Serotonin is a Dragenmire, so his "ears" are more akin to furred horns (the same color as the rest of him) sprouting from his head, with tiny tips pointing towards his back. His jaw is full of sharp teeth built to rip apart meat, and he can unhinge his jaw to swallow especially large pieces. His tail is long and prehensile, with two tiny spikes at the end of it.

He has thicker eyebrows, although they still have plenty of definition to them. He wears large, circular glasses that match Norep's, and never takes them off except to sleep. Usually Sero is glaring or looking miserable, but can be flustered around Norep (AND MAYBE... SMILE AROUND NOREP??). He doesn't blush easily except around his boyfriend.

Sero can be drawn romantically with Norep or any of the Quintet, but mostly Norep. As per his general violent streak, he's quick to jump to conclusions, and can be drawn goring someone, too. 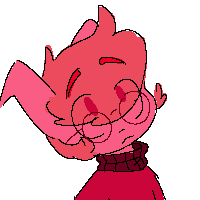 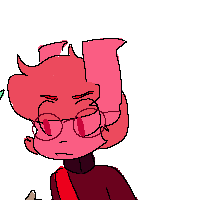 • Favorite color is blue
• Favorite season is Autumn - he likes the falling leaves
• Favorite memory is getting to cuddle Norep every night
• Favorite foods are raw meats that are easy to bite
• Strongest sense is touch
• Strongest taste is sweet
• Right-handed
• Isn't ticklish, will bite if prompted
• Favorite thing about Norep is... his courage
• Extremely fond of drone music. Used to sit at the synthesizer for hours and just hold two keys down, much to Dopamine's chagrin
• Fences in his free time, and is a total fencing snob.
• Feels guilty about enjoying the attention Adrenaline gives him, but doesn't know how to express that to Norep
• Isn't fond of scrapbooking, but often will sit down with Norep and watch him scrapbook while he eats
• Totally a size queen.
• Doesn't brush his hair in the morning, Norep does that for him
• Is secretly terrified that one day Norep will be fed up with him and move on, and has no idea what he'd do if/when that day comes