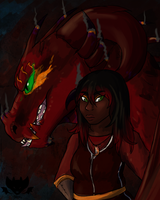 Stocky, has muscles mostly on her arms and legs. Chubby in the torso.

At first a friendship with Ayaan can seem like walking on hot coals; one wrong step and you'll get burned. For the most part this is true, as Ayaan is an overly emotional and extroverted person, and is often just grumpy. She's not one to keep her emotions bottled up and tells people as it is, not matter who or what. She comes from a proud line of talented weapons smiths and has trained under her mother's watchful eye for her entire life. She's a very proud person and holds herself in high regard. Once she takes a liking to someone she'll stop at nothing to ensure their safety and can become quite defensive of them. She takes nothing for granted and gets heated when other people don't appreciate what they've been given, including the life they live. She believes people should be able to take care of themselves and is unimpressed when people can't do basic things, like cook or clean. She's skilled at the anvil and knows her way around pretty much any weapon she can hold. She has a vast knowledge of metals, materials and weapons in general and is known to be able to fix anything in a flash. She also enjoys cooking and uses her own flames to ensure the perfect bake.

She won't admit she loves attention and enjoys the kicks she gets out of her element. She has a habit of showboating and running her mouth so the attention turns to her. She has difficulty reading situations and is one to act before she thinks. Even then, she rarely regrets anything and believes she does everything for a purpose. She learns from her mistakes quickly and knows what it means to lose everything. Since then, she's taken a 'no bullshit' approach to life that involves tackling everything head on and giving everything your all. This gets her into a lot of trouble most of the time.

Ayaan's control over her element is quite limited, as she's not as magically inclined as other fire users. She can produce flames in various sizes and heats and mostly uses them for cooking and metalwork. She can throw large fireballs at opponents that have such a huge force, not only do they burn the target but push them backwards. Despite this, she's quite skilled in using Ken and Klenots that are unfamiliar to her and can easily tap into other elements thanks to her partner, Pyralis. She's physically strong and relies a lot on weapons and strength in battle rather than magic. She leaves the firepower to Pyralis. She wields a long sword and takes a close-up approach to combat. She's not a strong team player and likes to take matters into her own hands. Pyralis is a horrible influence on her and teaches her the fun in fire and explosions. Ayaan enjoys having power but knows she can't abuse it, not matter how much people tell her she can. She's over appreciative of the things she has and tends not to push resources.