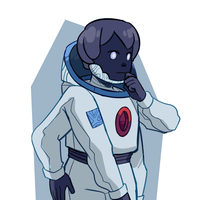 The N'mob are believed to be a pair of two subspecies, names currently unknown. Both species are six mirrored limbs in addition to a head; it is not immediately obvious which limbs are preferred for walking.

N'mob-design Environmental and Extravehicular suits are utilized by the Hummas extradition, as they are the closest to compliance with both [Goo alien] mobility as well as standard human-compatible locomotion.

The N'mob population was subject to an extensive AI-controlled breeding program for many, many generations before being contacted by the Plyd and and achieving long distance space flight. It is believed this breeding program resulted in the subspecies as identified. Also, due to the AI's selection factors, N'mob are almost incapable of subtle social cues - able to recognize them in other species, but unable to produce them on their own. It has been proposed this might be an intentional decision by the AI, as measure against subterfuge.

Offworlders question how much the AI - Who's name translates to "Mother" - controls society beyond breeding.

The most obvious thing when looking at a N'mob is how much clothing they wear - the first layer is temperature control, but there are perhaps 9 layers of clothing on top of that. This clothing is not coordinated; rather, on planet, it is used to communicate the general emotional state (There's no "I hate mondays" shirt, but there are items that indicate fresh starts and hatred). Yes, a N'mod is watercooled with external RGB.

Off world, Clothing varies from the AI designs slightly, but is usually identifiable by purpose. Layering might change several times in a day - an easier process with the AI designs rather than assembled wardrobes.

Reintegration of off-worlders is apparently not difficult, though many that leave the planet are loathe to go back. Other species are allowed to visit, but not to settle.