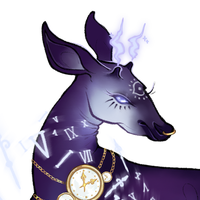 His personality is... complicated to discuss. Most of what I know of him is what he believes of himself, and he appears to have no rhyme nor reason to what he does. They want something, they take it. Someone catches their attention, they figure out what kind of destruction this person arbitrarily "deserves". I have never seen them notice if they feel love, or compassion, or even kindness. They are selfish, they are childlike, and they see no reason to change because, to them, the world is just a dream. What does life matter if it's not even real, if she's just waiting to wake up and move on with her life? If you dream and you find someone annoying, so you wish them away, or change their inception so they were never a part of your dream, are you in the wrong? If you laugh because you destroyed something that someone loved but it's not even real, are you a bad person? In that dream world, perhaps not. But to those who live in the dream with you.... perhaps you are the monster. Perhaps you are the nightmare.

"Once upon a time" is entirely too romantic for Ashlish. It speaks of hope, of faith, of joy. That this was a time long ago that doesn't exist, something where you are inherently safe because you are not inherently there. Those bad things happened, and the hero overcame it, but it was never going to hurt you, never going to touch you, because it never really existed.

Now that I think about it, maybe it does fit him well. It doesn't fit my - our - view of the story, but it would fit it for him.

Once upon a dream, there was a young child. From what I have uncovered, they were loved and cared for, perhaps by a mother. Whoever the father - and there are unconfirmed rumors that it was a local maskmaker - they were not, at any time, involved in the child's childhood. He grew, happy, the time blissful as a dream. Perhaps, of course, perhaps... they weren't as simple or happy as he remembers. Maybe they were hard, long, bitter. Maybe this woman resented him, kept him at arm's length, made him create some semblance of someone who cared. I can only read the memories he believes may be true, and much of his life seems to be simple stories to help him feel as though he is right with the world.

He found magic while he was young, and the woman seemed to delight in it. A shared joy, as though being odd and strange and terrifying was something to aspire to. Her magic was only little then, opening his eyes wide and being swept into the current of time. He saw, well... I'm not entirely sure. Her memories are soft here, soft, as though she's too scared to visit and find out it was all just a ruse. The "mother" called her "lucky," and asked for Ashlish to tell her stories. To please her, they went deeper and deeper, fading out of time entirely. This is my own interpretation, but I believe he started to travel, his power and discipline growing so that he could be gone for swatches of time without even realizing they had passed.

Eventually, she was no longer there. Whether she had aged away from him or something else happened, I do not know. I don't believe he allows himself to dwell on it, but perhaps I will give you what else I know once I have time to catalogue and compile. I can't give it all away at once, after all - in this time and place, we all have livings to be made Suffice it to say that she found herself alone, without guidance. Without purpose, for what purpose does a child have except to explore and grow and find joy in the world? There was no more joy, no scaffold to know how to climb, and exploration had been what destroyed his world.

Is it any wonder he began to claim this world was just a dream? That there is nothing real because he lost the only good thing, and life could not simply be awful?

They were alone for many years, I believe. It is a time without meaning or self-reflection, one they don't dwell on for any span of time. I only believe time passed at all for there is some indication that they grew in stature, if not in maturity. I wish to spend more time looking at this time period, but I have not had the time to really watch, learn, listen. I was asked about the creature known as "Ashlish", and I am here, saying what I know. I also do not know if they left, or if people found them. I have some theories that he, perhaps, lost himself into his magic, that he was actually able to step i and through and beyond time, and that he chose a place and time where he was not known and was not abandoned. He did not exist to the passing world, and then, suddenly, he did.

It is surprising that he has kept many of these early attempts at communication, but, then again, he seems to truly believe that they are not real. This is all just a dream, so any awkwardness is just what happens in anyone's dreams. The next time and times are much of the same - there are small stories, possibily irrelevant to the grand scheme of his story, so I'm not including them. He has done little of import except exist. They have done acts that are silly, acts that are stupid, and many acts that are downright malicious. But nothing they have done has truly mattered - nothing has really changed the general world. Perhaps it affected some minor people, but if he was removed from the timeline, very little would change. He has been alive for centuries, and yet has left an almost impossibly small mark on the world. Has he ruined people's lives? Of course, but they were people without much life to ruin, often well on their way to destroying it themselves. Did he cause and commit murder and mayhem? Yes, but those things happen to people, with or without him. One more life ruined doesn't make him any less real. Do I want to be someone he notices? Of course not. Until that happens though, I'm safe.

It's almost as if he's just a figment of a dream.

Whenever Ashlish uses their powers, they "slide" into the temporal stream and can see things that have happened in the past. Time still passes "normally" (and, therefore, passes them by), but they are fully removed from the effects of time, including aging. The amount of "stuff" he views in the past is not a one-to-one translation of the amount of time he spends within the time stream - time is odd, after all, and history sometimes slows itself or quickens itself, depending on it's mood. As he gains more power, he will be able to see further back more clearly and fine tune/notice patterns more easily, and, with a higher discipline, he will be able to control more and more of what he sees and when he leaves; he will need quite the high discipline to be able to return to normal time when he chooses/be cognicent of time passing at all, so this is more related to what he actually sees while looking at the past.

He has the distinct belief that becoming strong enough will allow him to travel through the past, but this is highly unlikely and would require a ley token as it is a separate magic entirely. Due to frustrations this will cause, it is more likely that he will fall to a different ley token, making this a complete impossibility.

Magic slightly impairs the caster's memory, so that they may not remember using it, or be confused afterward (2).
Ashlish does not recognize that his use of magic doesn't stop time. If people are gone, they are missing. If they are old, something happened to them, or, well, it's just a dream, his brain just wanted him to view them as old now. Every time he uses his magic, he gets deeper into the belief that this is all just a dream

+1 discipline. Ashlish can control some of what he sees when lost to time