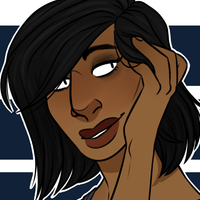 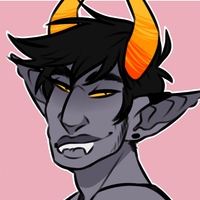 Mejara is someone who could easily be considered an anti-hero. She's very volatile, and often finds herself in trouble with the law, even after she redeems herself to the people around her. Quite often she'll feel as though she's putting her relationships at risk, but never knows what to do to stop herself.

She had her first taste of bloodshed at a young age after being drafted into a local gang, run by a vicious purpleblood, Jarvis Nahrïm. She quickly worked her way up the ranks, and gained the attention of Jarvis, who saw her as a viable matesprit. The only trouble was, Mej wasn't out as a woman at that point, and Jarvis was very much against women being in his gang, with the exception of their tech expert Koster. This resulted in Mej repressing her identity in order to please Jarvis, and she became depressed and ruthless in her work. In her journey to find someone who would accept her, she came across Takaio, an escort who she took a liking to.

Mej soon found herself spending more and more time with Takaio, and instead of having a purely intimate relationship, they'd find themselves simply talking for long periods of time. She used their time together to de-stress and vent about how inadequate she felt. Unfortunately, shortly after she came out to him, he left town. She thoroughly believed that he left because of her revelation, and fell deeper into her depression.

In a last ditch attempt to have someone listen to her, she became closer with Koster, immediately telling her about wanting to transition. Koster was extremely supportive, even going so far as to buy Mejara more feminine clothing and makeup. The two became ridiculously close, soon deciding to become moirails. At last Mej had some peace in her life. It all lasted a while, and the two girls spent nearly all their time together. That was, until one of the gang members spilled Mejara's relationship with Takaio to Jarvis, and, while Mejara was out, Jarvis searched her room and found her stash of women's clothing. When Mejara returned she was savagely beaten to within an inch of her life while the rest of her gang looked on in amusement. All but Koster, that is.

After literally being thrown from her gang's headquarters, Mejara found herself wandering the streets of a nearby town, fighting other trolls for any scraps of food she could find. She'd often turn to cannibalism if necessary. Finally, one day she was found in an alley by a cop, Epsilo, who for some reason didn't immediately kill her. She was instantly attracted to him, and after a little apprehension on Mejara's behalf, she joined up with him and set about changing herself for the better with his help.