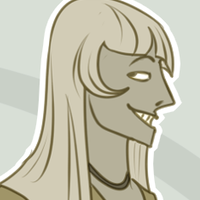 Very flirtatious and laid-back. Has a aura of danger and power around her. She is extremely intelligent but sometimes can be oblivious to risk. Doesn't like to get stressed or spend a long time working on something and wants time for herself. She speaks slowly and softly with a slight welsh accent.

Was sent to Earth as an assassin during the gem war. She was left behind during the retreat and hid in a cave with a few other gems. That cave is now where they stay as they look for a way home.

Anglesite is a thinner and taller gem, with a trademark of Anglesites being clawed hands. Her current form has long, straight grey hair and darker grey skin that has a slight yellow-green hue. She wears an asymmetrical dress that is light grey with a tan trim. On her shoulders and torso she wears a shawl of the same tan. She appears to be wearing socks or stockings, as she has no individual toes. Her gem is an Octagon cut and is on her right thigh. She also wears a dark brown choker necklace that all of her teammates wear as well.

Increased sight and has very good depth perception.
Has skin that can corrode away a gem's physical form over a long period of time.
A very slippery crawler; can get away quickly in maze terrain.
stronger and more dangerous than she looks.

Not very fast considering her size, and not a good swimmer.
Not a very good melee fighter, if she doesn't have distance its hard for her to fight.
Is quite oblivious and takes too many risks, easy to sneak up on.
Is more heavy for her size so she falls quicker.