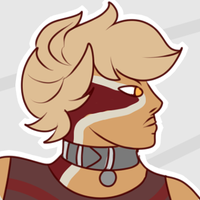 Created in the Beta Kindergarten, Mookaite was immediately sent to fight in the war. However, her batch was made right before the retreat was called, so she didn't get very far. Feeling the sense of danger, she ran away from her squadron and hid in a cave. She met a few other gems there, and the cave is now where they stay.

Being a fully-formed Jasper, Mookaite is strong and tall, with well-defined muscles, thick legs, and a round chest. She has orange skin with red and cream markings. Her gem is oval shaped and sits in the middle of her chest. Her current form has short, fluffy blonde hair. She wears a dark reddish-brown tank top with crimson stripes, and tan pants with a silver waistband and darker socks. Her arms are covered with a darker tan leather-like brace with a silver band around the elbow. She also wears grey boots and a collar, showing her service to Tiger's Eye.

Increased strength; has no trouble lifting very heavy objects.
Can use beak helmet to headbutt, charge, or otherwise ram enemies or objects.
Has a lot of stamina, and can fight or walk for a very long time.