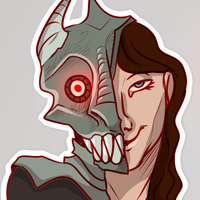 The time before Zookeeper, Allie was a very smart and adventurous child. She has little personality under the suit's control, and its pretty obvious that the suit is causing her a high amount of pain. In the suit, she's very ruthless when she locks onto a target and will do anything to capture or kill what she's programmed to hunt. She tries to break away every second she's still under control.

Allie grew up normally, and she loved to explore. When she wandered too far, a highly energized portal opened right in front of her, burning off the right side of her face. Zookeeper found her and took her in under the guise of being an assistant, but he put her in the metal suit to stay and patrol the basement of his zoo. The suit now controls her and makes her extremely powerful, but inside her mind she is close to breaking away from the control of the computer and getting her life that was stolen from her.

Allie is thin and has light skin, long, dark brown hair, and blue eyes. Under the suit, she has a side cut and the right half of her face is burned. She has a tall face with a square jaw. Her suit entails a dark grey jumpsuit and metal enhancements that resemble a dragon or lizard. She has three claws on her front limbs and two on her back, and large, sharp spurs on her ankles. She can stand both digitigrade and plantigrade. Her mask resembles a horned lizard and has a unblinking, red eye that is set loosely in its socket and can move in any direction, independent from her other eye. This red eye can see better than any human's eye and can see infrared and ultraviolet. She is extremely slippery and dexterous, and very quick. Her jaw has a large bite force and she can climb very well, making her a very dangerous foe, especially when she locks onto you as a target.