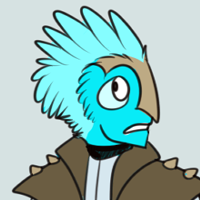 Very logical, and bases everything off what she thinks things should be like. Stays calm under pressure, and doesn't get emotionally easily. In fact, it's hard to get through to her at all. She seems to close off everything around her a lot of the time, especially when she gets focused on something.

Was sent when the earth was beginning to be colonized as the scout, and participated in the war as such. Once the retreat was called, however, she was left behind with a few other gems. They hid in a cave to not be found by the crystal gems, and that cave is now where they stay.

Turquoise is roughly Y-Shaped, With a thin waist and legs but broad shoulders. She has bright teal skin, with a head of feather-like structures. She has light markings under her eyes like a bird. She has a light tan structure on her face that starts at her forehead and curves down like a beak, resembling a nose. She has a sharp jaw and pointed chin, and dark blue eyes. Her current form entails a light grey, long sleeve shirt that has a split down the middle, darker brown pants that go to her knees, and a short jacket of the same color that has light brown spikes on the shoulders. She also wears small brown shoes and a dark collar, showing her service to Tiger's Eye. Her appearance is very bird-looking, which is reflected in her mannerisms, jerking her head around quickly and climbing structures with ease.

Very hydrodynamic; her speed is unmatched in water.
Able to jump extremely high and scale difficult to climb areas.
Very agile and dexterous.
Increased sight; can see far away in high detail.

Cannot fight very well up close. Only really fights far away.
Other senses are very awful, especially hearing. If she can't see you, she probably won't find you.
Does best in closed, easy to climb terrain. Long stretches of land are harder for her to maneuver.
Not fast on land.