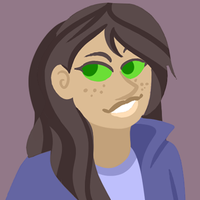 Athena is a very quick-minded, honest girl that craves adventure and doesn't like to be confined. She never backs down from a challenge and is very protective of her friends and family. She has a hard time communicating her thoughts but she is very upfront and brash about her opinions, and isn't afraid to do the right thing even if it makes her look weird. She doesn't really care what others think of her and only wants what's best. She is a very good artist and tries to communicate her thoughts through her drawings instead of through her words.

After Athena's parents died, she was the first to be adopted by her grandmother. She had alright grades but mostly slacked off by drawing in class. She wants to be a comic book artist when she grows up, but for now, she illustrates her and Lyra's book, The Monster Directory.